A Disguise to Die For by Diane Vallere 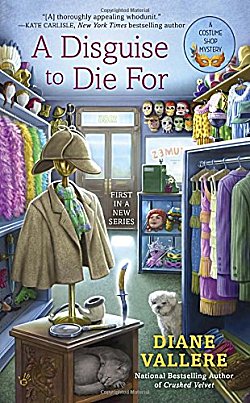 First Line: "Give me the knife," demanded the cranky man in the wheelchair.

Margo Tamblyn has her first big order since returning to Proper City, Nevada to run Disguise DeLimit while her father recuperates from a heart attack. A wealthy socialite needs forty costumes for his detective-themed birthday celebration. Unfortunately the birthday boy doesn't get to celebrate for very long. When Margo goes back to the kitchen to help, she finds her friend Ebony Welles holding a knife and standing over the dead man.

Margo knows Ebony is innocent, but it doesn't look good when the party planner leaves town. Now the Las Vegas magician's assistant is on her own to search for the real killer.

I am a huge fan of Vallere's Material Witness cozy series, so I was eager to read this first Costume Shop mystery. This, too, has the earmarks of another enjoyable series. First of all, the name of the shop-- Disguise DeLimit-- is a stroke of genius. Second of all, even if you're not a fan of "dressing up" (like me) I dare you not to be wildly impressed by all the detective-themed costumes Margo puts together. I almost wanted to drive up to Proper City and demand one for myself.

Margo is a caring and creative main character who's still hurting years later from her mother's death. Her penchant for wearing pieces and parts of costumes every day did make me raise an eyebrow, but somehow she manages to pull it off when most of the rest of us would probably be taken in for a psych evaluation. Bobbie, her best friend from high school, runs a local non-profit, and helps anchor Margo during the more hectic parts of this, her first investigation. It also doesn't hurt that there's a mysterious and handsome man called Tak who seems to be keeping an eye on her, too.

For me, the only real weakness in A Disguise to Die For was the character of party planner Ebony Welles (whose bichon frise is named Ivory). Margo tells us how important Ebony is in her life. The woman is the closest thing to a mother she has. But Ebony leaves town and stays hidden for most of the book. This means her character is barely developed, and readers can't feel the emotional bond Margo has with her.

Even though the lack of Ebony was felt, I thought Vallere painted a wonderful portrait of a single father putting everything on hold in order to raise his daughter. Now this was an emotional bond that came to life on the page-- even if the man was a bit cranky about being sidelined.

Diane Vallere has created yet another interesting cast of characters, and I look forward to getting to know them even better in the next book.