Winter at the Door by Sarah Graves 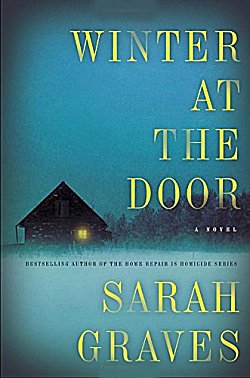 Boston homicide cop Lizzie Snow has moved to the Great North Woods of Maine to find her missing niece. Sheriff Cody Chevrier hired her for her expertise because he thinks someone's going around killing retired police officers. Both of them are going to discover that they're going to be working flat out on even more cases in their sparsely populated yet huge county.

I first became acquainted with Sarah Graves through her Home Repair Is Homicide cozy series featuring Jacobia Tiptree. When I saw her name on this new series that looked much edgier, I knew I had to give it a try. I'm glad I did.

Lizzie Snow is definitely a city girl with her city clothes, hair, and makeup. But don't let that fool you. She's smart, tough, and intuitive. She also has a good sense of humor, and her one-liners often bring badly needed comic relief after something dire has occurred. I really enjoyed Lizzie's voice-- and the setting of the Great North Woods of Maine. As an outsider myself, I appreciated following along with Lizzie as she became acquainted with the local residents.

One of the strengths of Winter at the Door is its cast of characters. Yes, Lizzie is front and center, but she's not the only interesting face in the crowd. Her boss, Sheriff Cody Chevrier, has some of the traits of a more famous fictional Wyoming sheriff, and it definitely makes me keep an eye on him whenever he appears. Then there's a young woman named Missy; Lizzie thinks Missy would be top notch working in her office-- and I agree. Trey, the local veterinarian, is easy on the eye and the heart, but unfortunately Lizzie keeps getting distracted by an old flame who broke her heart. Dylan is the heartbreaker, and I wish he'd leave Lizzie alone. Romantic triangles get old really fast.

Then there's the young boy called Spud. Is he a good kid? A bad one? Can he be put on the right path? I learned a lot about both Spud and Lizzie in their scenes together.

Graves had me in the palm of my hand with her setting, story, and characters. The only thing that kept me from giving this book the highest rating that I could was the fact that there was a bit too much going on all at once for such a sparsely populated area-- and a few inconsistencies (a radical personality change, smoking wood that had just been completely soaked with water, a gunshot victim who's a miracle healer) that could've been taken care of with more careful editing. I can see these things throwing some readers completely out of the story. Thankfully I just filed these tidbits away and kept on enjoying-- so much so that I'm looking forward to the next book in the series, The Girls She Left Behind.