Silence of the Lamb's Wool by Betty Hechtman 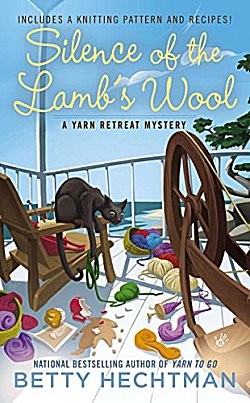 First Line: There is nothing like being awakened by a ringing phone and finding a pair of yellow cat eyes staring back at you.

After inheriting her aunt's yarn retreat business, dessert chef Casey Feldstein has an ambitious second retreat planned. "From Sheep to Shawl" is supposed to show retreat members how to shear a sheep, prepare the wool, spin it into yarn, and then use that yarn to knit a shawl.

Casey has hired expert spinner Nicole Welton as the teacher for this retreat, but when Nicole is found dead Casey not only has to work frantically to prevent the retreat from becoming a disaster, she has a killer to find.

Betty Hechtman's Yarn Retreat cozy series continues its winning ways in this second book. With my loathing of overbearing mother characters I have to admit that Hechtman thrilled me to bits when Casey's obnoxious, class conscious parent turns out to be barely a blip on the radar in Silence of the Lamb's Wool. But the non-appearance of one character is not why I enjoy this series so much.

Beyond the gorgeous setting of California's Monterey Bay, Casey has gone to the trouble of actually learning how to knit-- something that's not always a requirement in cozy series like these. We're not hit over the head with what she's learned; it's just nice to know that she's interested. It's also good to see that she's not a fabulous business woman. Casey's well known for running when the going gets tough. To have her seamlessly take over her aunt's business when (1) she's never run a business before, and (2) she knows nothing about conducting retreats or even knitting for that matter, would be completely unrealistic. In this book Casey makes novice business mistakes, and I think it makes the story much stronger.


Some readers may not be pleased with the knowledge that Silence of the Lamb's Wool ends with a cliffhanger, but it certainly makes me look forward to the third book in the series, Wound Up in Murder. The mystery in this book is a good, solid one that often left me guessing. The strong secondary cast helps Casey throughout, and I was happy to see that the retreat members were not involved in the story as deeply as they were in the first book. Hechtman isn't always going to use Casey's customers as murder victims. (Definitely not good for business!)

An intriguing mystery, a strong cast of characters, a little romance for Casey, some yummy desserts, and a fascination with knitting all combine into a winning series that has me wanting more.