The Girls She Left Behind by Sarah Graves 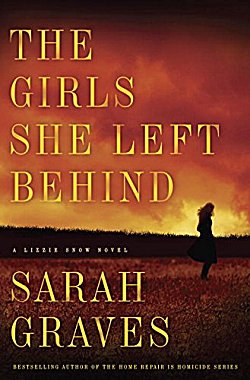 First Line: It wasn't even my idea.

It's Lizzie Snow's first winter in Bearkill, Maine, but instead of dealing with snow and ice, forest fires are threatening many of the small towns in the area. In the midst of the smoke and falling ash, teenager Tara Wylie has gone missing. When Lizzie starts to treat this with a sense of urgency, the locals tell her not to stress out-- Tara's taken off before. She's just up to her old tricks.

But when the girl's mother receives a terrifying text message, Lizzie swings into high gear along with Sheriff Cody Chevrier and Maine state police officer Dylan Hudson. Henry Gemerle-- a kidnapper and rapist who held three girls prisoner for fifteen years-- has escaped from a psychiatric hospital and headed right for the Bearkill area.

This is a frustrating case for Lizzie. Tara's mother is keeping secrets and telling pointless lies, and there's someone else who wants to track down Tara Wylie and Henry Gemerle-- and this person in the shadows doesn't exactly have mercy or justice in mind.

Sarah Graves certainly knows how to write a story that grabs you by the throat and won't turn you loose until you've read the last page. Once again, she uses her Maine North Woods setting to its best advantage. That forest fire that experts and volunteers alike battle throughout the book adds real tension to the story, and little inclusions like the definition of "North Woods chrome" bring verisimilitude and smiles.

In The Girls She Left Behind, almost half the story is told from the viewpoint of a young girl who managed to escape Henry Gemerle's clutches. At first the girl has my complete sympathy, but the more she talks, the more I see... and the more I wonder. It's a very clever and very well-done plot device. In fact this book is filled with women whose motivations readers will wonder about. Jane, the girl who escaped; Jane's cousin Cam; Tara Wylie, a young girl who made the wrong decisions on the wrong day; and Tara's mother Peg. Once in a while I would find myself looking up from this book and asking the air, "Do any of these women know how to tell the truth?" Yes, all the lies and evasions could be frustrating, but it certainly kept me on my toes.

Of all the characters in the book, my opinion of Sheriff Cody Chevrier continues to rise. He may be sheriff in a huge yet sparsely populated county in Maine, but he stays on top of all the crime stories he can because "you'd be surprised how many fugitives think Maine's a good place to vanish." Chevrier may not have the sense of humor of Walt Longmire, but he still reminds me of my favorite Wyoming sheriff.

Like Winter at the Door, Graves' second Lizzie Snow book has almost too much going on. The fire. The missing teenage girl. The escaped psycho. All these lying females flitting around. Lizzie's search for her missing niece. I'm definitely looking forward to the third book in this series, and I'm hoping for three things: (1) that there's a little less for Lizzie to deal with, (2) that she either finds her niece or the search is dropped because it really doesn't add that much to the books, and (3) that Lizzie makes up her mind between Trey and Dylan. Romantic triangles stink when they hang on too long.

Not read Winter at the Door and wondering if you need to? You don't. The Girls She Left Behind reads quite well as a standalone. Head on up to the Great North Woods with Sarah Graves and Lizzie Snow!