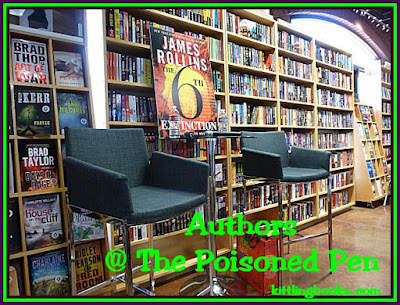 Denis and I share an online calendar so we can avoid having to reschedule things. I don't have all that much on mine-- mostly author events at my favorite bookstore, The Poisoned Pen. Evidently Mr. Kittling got tired of the fact that all the juicy events were being scheduled on days that he always works, so when he was putting in his bid for the vacation days he wanted, I suggested that he ask for a couple of event days, which he did receive. That's why he and I both went to see Paige Shelton, Jenn McKinlay, and Elizabeth Heiter on Saturday, January 9.  Paige and Jenn both know Denis and always ask about him when I'm there and he's not.

During the holiday season, I posted on my Facebook page a photo of a man who had a beard heavily laden with gold glitter. Evidently that was the thing for beard wearers to do to show their holiday spirit. When I told Jenn on Facebook that Denis took the day off in order to come see her, she said that the occasion merited a glitter beard.

She was disappointed when she saw him sans glitter, but was understanding when I told her that glitter spray was in short supply after New Year's. "Next year!" Jenn declared, and then she and I proceeded to outline the best color palette-- silver for a more sophisticated look, or red, magenta, lime green.... "A veritable unicorn sneeze!" said Paige, who'd been smiling the whole time Jenn and I were outlining our plans for Denis's beard. But we did have to cut things short so the event could start!

Poisoned Pen employee John Charles was the interviewer for this event. He is an absolute font of bookish knowledge and a fabulous addition to The Poisoned Pen staff, but he and I share a dislike of the spotlight. Being in front of a crowd of people wasn't his favorite place to be, but he handled it well by asking interesting questions and keeping the focus on the authors. Way to go, John Charles!


When did you know you wanted to be a writer?

Paige: I write the Dangerous Type series set in "Star City," Utah, and the Scottish Bookshop series set in Edinburgh. I wrote a poem when I was a child and knew I wanted to be a writer then, but I really started to write in 1997. It took me thirteen years to be published.

Jenn: I write the Cupcake Bakery series set here in Scottsdale, Arizona; the Library Lovers series set in Connecticut, and the Hat Shop series set in London. I was the youngest in a family of six children and became the family recorder at a very early age. In fact when I was seven or eight, I learned that I could write a family newsletter and sell it to my mom for candy money.

Elizabeth: It's all about the puzzle for me. I'm a plotter, and I'm not happy until I have the entire thing mapped out. I also think I do it to give my characters some sort of closure. People don't always get that in real life.

Paige: The only writers group I could find in Salt Lake City dealt solely with the romance genre. I thought, 'I've never read romance, but I'm sure I could write it.' I started submitting, and I started getting lots of rejections. I finally got one piece of constructive criticism that made all the difference. The criticism began, 'Have you ever read a romance novel?'

Jenn: I cut my teeth on Nancy Drew. Then I moved on to writers like Agatha Christie, Elizabeth Peters, Mary Stewart, Victoria Holt... oh! Victoria Holt was the first time I was allowed in the adult section of the library! I'm a genre reader, and you'll definitely not find me in 'literary fiction,' although I am taking a look at other genres as far as writing goes. I'm running out of ways to kill people.

[Now... if you can't tell by now that these ladies definitely knew how to keep us entertained, read on!]

Jenn: For me writing is an out-of-body, full sensory experience, and there's nothing really that I hate about it-- especially since I've managed to stagger my deadlines.

Paige: I never have to wear dress-up shoes again unless I want to! I've found that I can't really plot a book out until I'm 200 pages in. Then everything falls into place, and writing is a joy.

Elizabeth: I think my favorite part of writing is the research and talking to readers. The worst parts are facing multiple deadlines, and then sitting in my office trying to come up with innovative ways to promote my books on social media.

Tell us a bit about your current book.

When John Charles asked this question, all three authors wanted clarification on which book he was asking about. The book that's just been released isn't really their current book. They're doing edits on the book that will be published next, and putting the finishing touches on the manuscript on the book after that. "Current" means something completely different to authors!

Jenn: (grabbing a copy of Copy Cat Murder and scanning the back quickly) One of the things I enjoy the most about writing a series that takes place in a different location is writing about the things they do that we don't. I was rather surprised that Guy Fawkes Night is still a pretty big deal in England. Fireworks. You've probably all seen a Guy Fawkes mask. I wanted one on the cover, but I got voted down. And they always burn the poor guy in effigy. That made me think... what if the 'effigy' they were burning was a real body? And this gives me the chance of having Harrison be a suspect in the investigation.

Paige: The last time I was here, I came to see Kate Carlisle and Jenn-- and they both looked  at the backs of their books to remind them what the books were about. So this morning, I read the back of my book and even made some notes. I've since forgotten all that! The main character of my book To Helvetica and Back-- Clare Henry-- helps her grandfather run The Rescued Word, a shop that repairs old typewriters and restores books. One day a rather scary man comes in and demands to buy a typewriter that Clare is repairing for a customer. Clare has to threaten the man with calling the police before she can get him to leave. The next day she finds the man's body in the alley behind the store, and she has to find out why the dead guy would want an old typewriter.

Elizabeth: My character, FBI profiler Evelyn Baine, had a quest that was completed in the previous book, so in Seized, she's kidnapped by a cult of survivalists. The cult was one the FBI wasn't sure about, but once Evelyn is inside, she realizes that this group is a very real threat. Now that she's a hostage, how does she get the word out?

What sort of research have you done for these books?

Elizabeth: I've done all sorts of things. Gone to forensic labs. Attended the FBI Academy and fired all sorts of guns. I showed up for that in a skirt and heels which wasn't a good idea....

I asked one of the agents if he had a cuff case for his handcuffs or if he wore them looped around his belt. I wondered why his face turned bright red, then he told me that a cuff case was much better than looping them around your belt because-- sooner or later-- they're going to fall in the toilet!

Paige: I researched geology; typewriters-- how much they're worth, how to repair them; and old mines. The most interesting research I never did was when an early reader wrote and told me that she loved Baskerville the calico cat, and that I could tell everyone in the next book in the series how rare male calicos are. "They are very rare. Did you know that?" I had no idea!

Jenn: I had a scene set in the building in London that's called the Gherkin, so I wanted to go inside to check things out. I didn't realize that the building has heightened security, so I had to check out blueprints and architects-- thank God for the internet! Trying to get some idea of the security layout turned into some sort of covert op!

Jenn: I don't know, what do all of you think? [The consensus seemed to be comedian.] No one said homeless, so thank you for that! Actually I might do something in the psychology field because why people do the things they do has always fascinated me.

Paige: I was in advertising for four years...

A Fan: You could help Elizabeth with her ads and social media campaigns!

Paige: (after the laughter died down) I'd probably be working another job and still trying to be a writer.

Elizabeth: I think I'd like to be in the FBI.

What is your favorite book or author?

Elizabeth: Shakespeare and Hamlet. I love the play within a play format. I also think that Lisa Gardner's The Survivors Club is phenomenal.

Paige: My son and I were recently on a road trip, and we listened to Andy Weir's The Martian. There's quite a bit of tech stuff in it, but I loved it. Another book that I turn to again and again is Diana Gabaldon's Outlander.

Jenn: I love Paige's and Elizabeth's books! [Which led to a chorus of Awww's throughout the bookstore]

What are three things you cannot live without?

Jenn: Besides my family, right? Chocolate. Coffee. My MacBook Air.

Elizabeth: My family. Chocolate. My computer.

It was then time for a very long signing line to form. Unfortunately Denis and I couldn't stay very long, but we did get to meet Paige's husband Charlie.

What a fabulous time we had! And... if you're wondering about that Poisoned Pen gift card that I mentioned a week or so ago-- you know, the one that was burning a hole in my wallet?