Thread and Gone by Lea Wait 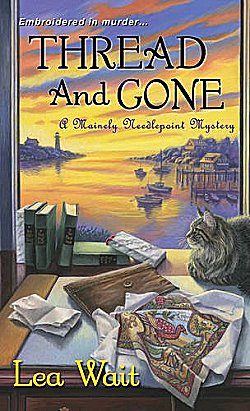 Mary Clough livens up the Fourth of July celebrations of Angie Curtis and her fellow Mainely Needlepointers. Seems that Mary has discovered a piece of antique needlepoint in the attic of her family home, and she wants the group to take a look at it. When they do, Angie's best guess is that it may have been stitched by Mary Queen of Scots. If she's right, that piece of stitching could be extremely valuable. Before starting any further research, Angie takes the needlepoint to her family lawyer who locks it in her office safe. But when the lawyer is found dead and the needlepoint missing from the opened safe, Angie knows she has to find a killer in addition to the provenance of that needlework.

I discovered two brand-new cozy mystery series in 2015 that I absolutely love, and Lea Wait's Mainely Needlepoint series is one of them. Wait has a knack for combining strong characters and intriguing plots filled with fascinating historical tidbits, and I find it irresistible.

In Thread and Gone, one piece of extremely old needlepoint has possible ties to Marie Antoinette, Mary Queen of Scots, and all of the Scottish queen's attendants who were also named Mary. (It's not as confusing as it sounds.) Wait also highlights a connection between Maine and France that I'd forgotten, and I appreciated the memory jog. In addition, the author's inclusion of quotes at the beginning of each chapter gives a real sense of the history of needlepoint.

So many of those on the suspect list are locals living in a poor area dependent on tourism. Times are hard. Money is scarce. Wait does an excellent job of showing us people who are tired of working endless hours to barely make ends meet, and she does it in a subtle way to root us firmly in the setting. (It also makes it more difficult to pinpoint the killer!)

As always, Wait's characters shine. Level-headed, smart Angie Curtis previously  worked for a detective agency, and this makes her one of the best amateur sleuths around. This time she's not aided by her grandmother, who's on her honeymoon in Canada. I did miss her, but the elderly Ruth filled in very well. One of the Mainely Needlepointers, Ruth is crippled by arthritis and helps Angie with online research. The fact that Ruth also writes and publishes erotica adds a little spice to a character too many would dismiss simply as a crippled old woman.

I think you can see by now why I enjoy this series so much. There are three books in the series so far, and I've read all three this year-- something that I very, very seldom ever do. All I can say is bring on number four!