I don't think I've ever mentioned this here on the blog before, but when I was a child, I used to collect stamps. I didn't know I was in the company of presidents and other august figures; I collected stamps from around the world that had horses on them because I loved horses, and I thought the stamps were pretty. I didn't collect them for long, but they certainly helped to spur other interests in me: art, a curiosity about other countries, and writing to penpals from all over the globe, and these interests have stayed with me over the years.

I ran across an article about stamp collecting while searching for something completely different online, and guess what it made me think of? Book covers. For some reason, the artwork on those stamps reminded me of book covers, and I wondered if any countries had ever issued stamps with a crime fiction theme. So, on with another search, and I was very pleasantly surprised at just how many I found. I also discovered an interesting website, Detective Fiction on Stamps, that I thought I'd share with you.

Join me on my journey through some of the streets of crime fiction philately. It's not all that different from casting your discerning eye over book covers!

Our first stop is San Marino, or the Most Serene Republic of San Marino, which is completely surrounded by Italy. Imagine my surprise when I learned that this tiny place has issued all sorts of stamps with a crime fiction theme! Here are just three:

It should really come as no surprise that Edgar Allan Poe has proved to be a popular subject for stamps around the world. This creator of the very first detective is actually more popular outside the United States. Let's take a look at some of his stamps:

His portrait on the US stamp is striking, isn't it?

It should come as absolutely no surprise that the world's greatest detective is a popular subject for stamps. In 1993, the UK issued an entire Sherlock Holmes series:

Even Sir Arthur Conan Doyle has gotten his own stamp, and as for that Hound of the Baskervilles stamp at the bottom... Yikes! I'd come unglued if I ran across that thing at night!

If Sherlock Holmes wasn't much of a surprise, then Agatha Christie shouldn't be either.  I did find a lot more of the author herself than I did of Conan Doyle, but there are also stamps showing her favorite characters-- like the actress Margaret Rutherford portraying Miss Jane Marple.

I laughed when I saw these two versions of Christie's Murder on the Orient Express! Hopefully you won't think less of me when I admit that my inner child prefers the second? 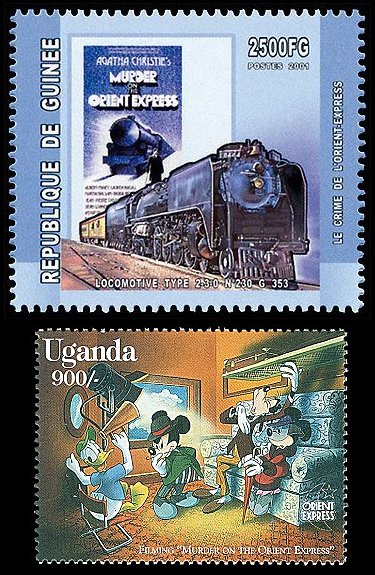 One of the things that astounds/pleases me is the diversity of the countries issuing "crime fiction" stamps. Isn't it great?

Finally, here are some other very important writers who have been portrayed on stamps. For some reason the very last one came as a surprise, and it should not have.

I hope you enjoyed my little tour around the world doing a bit of stamp detecting. Which ones are my favorites? The USA's Edgar Allan Poe, the Isle of Man's Dame Agatha Christie, Uganda's Murder on the Orient Express, and New Zealand's Ngaio Marsh... with the Isle of Man's Hound of the Baskervilles rating a creeped-out honorable mention.

How about you? Did any of these stamps strike your fancy? Inquiring minds would love to know!

Email ThisBlogThis!Share to TwitterShare to FacebookShare to Pinterest
Labels: Stamps