The Treacherous Net by Helene Tursten 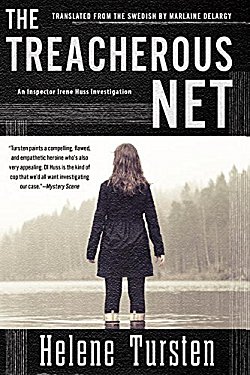 Göteborg, Sweden's  Violent Crimes Unit has its hands full. The city is experiencing an ongoing problem with gang violence, a mummified body has been found at a demolition site, and the body of a teenage girl has been discovered in the woods. The unit is stretched thin, but its new superintendent refuses to ask for additional help. As far as Detective Inspector Irene Huss is concerned, that new superintendent is a problem in and of herself. Efva Thylqvist ignores the women on her team, instead spending her time using her sex appeal to keep all the males under her thumb.

Huss will have to deal with Thylqvist, but it will have to wait. The body of a second young girl has been found, and there are strong links tying her to the first girl. Irene and her colleagues soon find themselves in the shadowy world of online predators and insecure teenage girls. They have to move fast before any more young women die.

It's always a pleasure to catch up with Detective Inspector Irene Huss. Not only are there fascinating cases to solve, but Huss has such an interesting personal life. In The Treacherous Net we get to see her twin daughters leaving the nest and the problems her aging mother is beginning to have. It's amazing how anyone can do a job as well as Irene when you consider just how busy she is, and that's part of her charm for me-- watching how she manages to take care of everything.

As nice as it is to catch up with Irene's personal life, I have to admit that this book-- although good-- is not a strong book in the series, and it's all to do with the two plotlines.  The cold case involving the mummified body at the demolition site is moderately intriguing, but it detracts from the internet serial killer plot. This second plot is strong and engaging, but its momentum is killed each time the cold case rears its head. The cold case, with its World War II and 1983 ties, is not strong enough to carry an entire book. Using it in a novella would have been better. The focus would've stayed on the internet serial killer, and I would have been turning pages so fast that they would've caught fire.

Although flawed, The Treacherous Net is still an entertaining read in a very strong and very highly recommended series.