Every Seven Years by Denise Mina 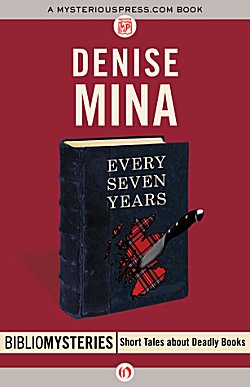 First Line: I am standing on a rostrum in my old school library.

Denise Mina's "Every Seven Years" is a worthy addition to the Bibliomysteries series of short stories about deadly books, all written by top authors for the Mysterious Press.  In it the main character reminds us that "the human body renews itself every seven years." Lo and behold, it's been seven years since Else last visited the remote island off the coast of Scotland on which she spent such a miserable childhood. Has she renewed herself?

Now an actress in London, Else is making an appearance on the island when her old nemesis hands her a library book that triggers terrible memories. It's the very same book that made her leave all those years ago, and the only reason why Karen Little gave it to her was to remind her of all the bullying Else had to endure. Or is it?

Mina has written a very quiet, very menacing story in which the reader will definitely side with Else after all the misery she's gone through. Else has a memorable voice, fierce emotions, and the determination never to be bullied again. But the problem with strong emotions and indelible memories is that they can be misleading. Nothing is quite what it seems in "Every Seven Years," and that makes for one very enjoyable ride.