Partners in Crime by Stuart MacBride 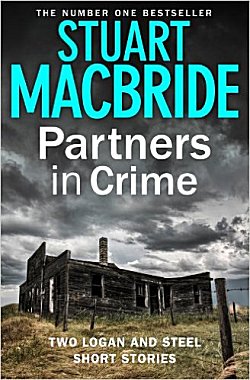 First Line (from "DI Steel's Bad Heir Day"): "Sod..." DI Steel stood on one leg in the doorway, nose wrinkled up on one side.

As advertised, here are two short stories from one of my favorite writers, Stuart MacBride. The first, "DI Steel's Bad Heir Day," features the inimitable Detective Inspector Steel and the poor put-upon Detective Constable Allan Guthrie. Not only does Steel force Guthrie to wear a Santa bobble hat complete with flashing lights, she's got him on the trail of her Christmas shopping. And then of course there's the matter of a missing man and an inheritance. This story is interesting in so much as we get to see someone else having to deal with Steel-- and it's certainly not easy.

The second story, "Stramash," has Steel on holiday with her partner. Unfortunately Steel has uncovered a crime, and instead of dealing with it herself-- her partner's insisted on this holiday and no work-- she calls the long-suffering Logan McRae to go all the way there to deal with it. Again-- it's not easy. A thought did cross McRae's mind in the midst of his misery: "A quick shove and she probably wouldn't wash ashore till she reached Ireland...."-- and I was mentally willing him to do the deed.

MacBride has done an absolutely brilliant job of creating DI Steel-- a character whom I loathe. I dislike the woman so much because she reminds me of a former boss who perfected shoving all his work off on his already overloaded employees. It's gotten to the point where I have an extremely difficult time dealing with an entire novel; there's just too much of Steel in one. However, these short stories are just the right length for me to get back in touch with my beloved Logan McRae and Aberdeen, Scotland.

MacBride writes with a wicked, twisted sense of humor that I enjoy. He can also create some fantastic plots for his mysteries, and his characters are so vivid that they leap off the page. His short stories show all this, so they're a good way to sample his writing before you bite into an entire novel. But if you find yourself wanting to give Steel "a quick shove," come sit next to me. We'll compare notes!