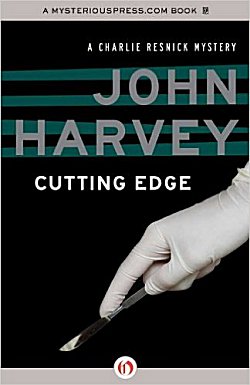 First Line: The first time she had taken off her clothes for him, he had told her she was perfect: not meaning to, not able to stop the word escaping.

A maniac with a knife is cutting up the members of a hospital staff, and Detective Inspector Charlie Resnick must find him before the slasher graduates from assault to murder.

Charlie Resnick is one of those British coppers who seem to have a dark cloud constantly hanging over his head. He's a good guy; he doesn't drink himself numb, and the officers in his squad would do anything for him. His job is really the only thing that keeps him going. Charlie is hovering somewhere between dedication and obsession when it comes to his work.

On the personal front in Cutting Edge, Charlie's ex-wife is doing her best to mess things up for him, and he's trying to help a down-and-out alcoholic musician. Both situations lead to mixed results, but they show readers much of what is so good about Resnick.

Harvey has created one extremely difficult and scary case to solve, and although I never really came to grips with it, it certainly was a pleasure to follow along with Charlie as he solved it. If you like tough investigations run by a smart, flawed, and very likable policeman, John Harvey's Charlie Resnick mysteries are just the ticket.