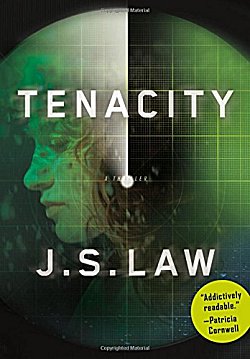 First Line: "How did you know?"

A woman's murder bears striking similarities to a cold case. An officer aboard the nuclear submarine HMS Tenacity hangs himself in the engine room. Lieutenant Danielle "Dan" Lewis believes the two crimes are connected, but she's going to have to put her life on the line to prove it.  Recently assigned to the Special Investigation Branch's Kill Team, Dan has a reputation that can be more hindrance than help. And to prove that those two crimes are indeed connected, she's going to have to get on board the Tenacity-- an alien world populated by an all-male crew that does not want her there.

My husband served in the Royal Navy aboard a nuclear submarine, so I started with a vested interest in this book. I'd read very few pages before that incentive disappeared-- sucked into a fast-paced and fascinating narrative that I didn't want to put down.

The book's title also describes Dan Lewis. Once she gets an idea into her head not even dynamite is going to dislodge it. Her upbringing-- being a part of "Clan Lewis"-- has given her bad habits. Her family is an extremely competitive one that believes itself to be just that little bit better than the rest. This has made Dan almost incapable of asking for help and unable to be a real part of a team outside her family. She's the only truly fleshed out character in the book, and I found her to be both mesmerizing and completely infuriating. A previous investigation into a killer named Hamilton blew up in Dan's face, and no one really wants to work with her except her present partner, John Granger. But will Dan accept his help, his knowledge? No. Just like the Hamilton case, she insists on going alone into a deadly situation aboard the submarine. For a so-called brilliant investigator, Dan can plumb the depths of stupidity. But no matter how angry this character made me, I could not stop reading.

Yes, I wanted to know more about why Dan became the person she is, but I was also drawn into the portrait J.S. Law painted of life aboard a hot, smelly, claustrophobic submarine. He proves to be quite adept at knowing just how much information to impart to add real depth and verisimilitude to the story without bogging down the pace.

Dan and the life of submariners weren't the only draws in Tenacity. The mystery kept me guessing all the way through. Dan may be the only fully realized character, but don't dismiss the others as two-dimensional cardboard cutouts. Not all the jerks are bad guys, and not all the good guys are heroes.  By the time I'd finished reading the last page, I was looking forward to Dan's next investigation. Bring it on!