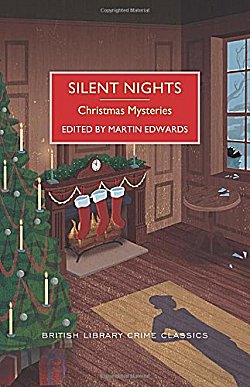 First Line (from Introduction): Christmas may be when we dream of peace on earth, and entertain feelings of goodwill to all men (and women), but there are limits.

Silent Nights is a collection of short stories written by some of the top mystery writers of the Golden Age. Some of the authors will be familiar to you, others won't. Although they're all set during the Christmas season, there is very little holiday spirit to be found in them, so don't pick this book up expecting to make merry.

Most of the mysteries seem to involve some sort of puzzle, and country house settings are found in quite a few. (Of course-- everyone goes to their country house for Christmas, don't they?) Editor Martin Edwards' introduction to the book and his individual introductions to each short story are interesting and informative, so I suggest that you don't skip them. One of the interesting tidbits I learned was that several authors represented in this volume wrote stories Alfred Hitchcock later made into films.

Having already read another British Library Crime Classic, Resorting to Murder, I knew what to expect. Many of the authors are no longer well known, but others-- like G.K. Chesterton and Dorothy L. Sayers-- are included here. On the whole I enjoyed Silent Nights more, although the quality of the stories is still a bit uneven. My favorites include Edgar Wallace's "Stuffing," J. Jefferson Farjeon's "The Absconding Treasurer," Sayer's "The Necklace of Pearls," Ethel Lina White's "Waxworks," Marjorie Bowen's "Cambric Tea," and "The Chinese Apple" by Joseph Shearing (nom de plume of Marjorie Bowen). Of these, Farjeon's and White's stories were used by Hitchcock. "A Problem in White" by Nicholas Blake (pseudonym of Cecil Day-Lewis) was unique in the puzzle category. The solution is not included in the story itself, but at the end of the book, giving readers time to mull over the clues and form their own conclusions.

If you're a fan of Golden Age mysteries, you're still going to find a new-to-you story or two. If you're a novice like I am, they'll probably all be totally unfamiliar. Since these were written many decades ago when outlooks were quite different, you will run into a racial slur now and again. I chose not to be offended and instead was pleased at how attitudes have changed. I also found it interesting to see how popular crime fiction has changed over time.

These British Library Crime Classics being released in the U.S. by Poisoned Pen Press are both entertaining and enlightening, and I recommend them.