Our Wee Trip to the UK, Chapter 5

After a good night's sleep in our comfy hotel room, it was time to go downstairs for breakfast. Denis and I aren't adventurous foodies, so we'd decided to go for the meal deals the hotel had. After all, we'd really enjoyed our meal the night before.

After some much needed fuel, we began to walk down the street to purchase our tickets for the bus tour. There are several open-top doubledecker bus tours operating in the city, so shop around to get the one that you want. Our tickets were good for twenty-four hours from the time we first stepped on the bus. We could travel any of the routes and get on and off as many times as we wanted during that twenty-four hours. There was also a free river cruise included which went between Westminster Bridge and Tower Bridge, but I already knew that how much I accomplished was going to depend on how my knees behaved. To say that they were painful would rank up there with all the accumulated understatements of the year.

I had spent quite a bit of time poring over the tour company's map before we ever left home. If you left click on the map, it will automatically open in a new window so you can see it in much more detail. Same goes for any of the photos in this post. Most of our traveling would be along the yellow and blue routes.

I'd already gotten a taste of London traffic from our journeys to and from Euston and King's Cross stations, but riding around on a doubledecker bus through the heart of the city for several hours would put me right in the heart of it. I have one thing to say to people who complain about traffic anywhere in the United States: You ain't seen nothin' 'til you've seen London traffic!

You can get an idea of what I mean from this photo. All sorts of vehicles everywhere. Pedestrians milling around. It made me thankful that I wasn't responsible for getting Denis and me through it. Denis used to work in London, so he's familiar with this, and even he didn't want to attempt to drive in it.

But now that I think back on it, do you know one thing that I never heard? Horns honking. Or people shouting. Keep calm and carry on.  This is how it is, and everyone just dealt with it without getting upset. I was impressed.

I was also back to self-induced whiplash. I've been reading about this city for most of my life. This was my first-- and quite possibly my last-- visit, and I wanted to see as much of it as possible. It was going to take more than one go-round on the bus, let me tell you!

As we began our tour, I felt like a country bumpkin in the big city for the very first time in my life. Why? Because of one thing. I don't know why, but the amount of construction everywhere in the heart of London surprised me. Perhaps it was because I thought there were so many old buildings that there wasn't room to build anything new. There are new buildings going up all over the place. Evidently I also thought that none of those old buildings would need any maintenance work. This country bumpkin just sat and took it all in.


The smallest things caught my attention. Like this sign for Ave Maria Lane. I could swear I read a book in which a dead body was found on that street. Self-induced whiplash and thoughts of crime fiction plots....

Two things I remember when I think of London (among hundreds) are flowers and signs. There are so many signs in London that I think it should be difficult to get lost. 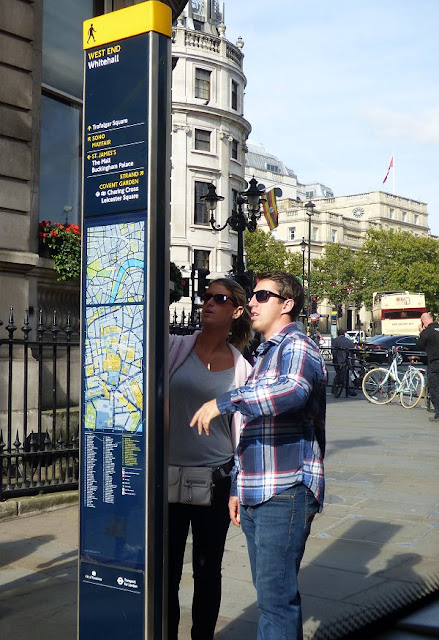 See? Not only signs, but maps, too!

I've been a lover of architecture for most of my life, and as I tried to drink in building after building, it occurred to me that I could sit in the bus and look at nothing but architectural details for days. 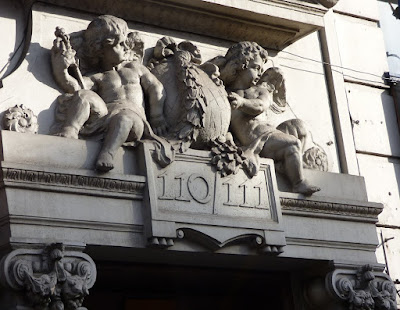 And what would London be without pubs? 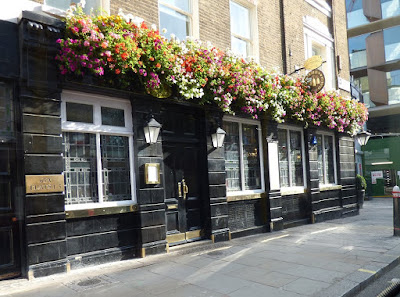 The Royal Courts of Justice made the theme music from Law and Order UK go through my mind....

And of course it wasn't a thrill to go over Tower Bridge.... Not at all!

It was about then that I wondered why we couldn't've gotten more of this sunshine in Scotland, but that was a thought that vanished as quickly as it appeared.

The Tower of London was next, and as we drove around it, I couldn't help but think of the exhibition of poppies that had been held there the year before. On all the swaths of green, I mentally saw hundreds of thousands of brilliant red flowers. 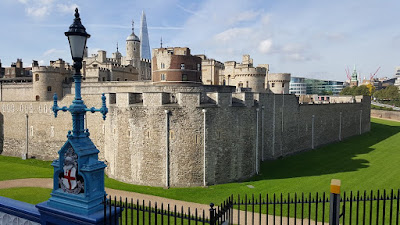 You're probably going to think I'm weird, but one of the best things I saw at the entire Tower of London complex as we drove around was this watcher on the wall. For some reason, he grabbed hold of my imagination and wouldn't let go! 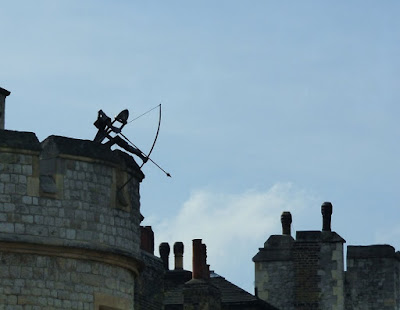 There are many ways to get around London, but one seemed to have so much more class than the others....

The horses were gorgeous, extremely well-mannered, and they seemed to get in and out of that horrendous traffic with no problem at all.

Of course we rode right past the most famous clock in the world....

And you can't go past the most famous clock in the world without going past the Houses of Parliament!


At this point, we'd spent hours on buses and getting on and off them. One of our stops was at Harrods for lunch and some retail therapy. (And before I forget it-- if you find yourself out and about exploring London, make sure you keep some loose change handy. You have to pay to use the public toilets.) As the day began to draw to a close, I could barely move. I knew I had to get to our hotel before my knees gave out completely. And I have to be truthful here. You know me as someone who's much more likely to share photos of wild creatures, the road less traveled, and the middle of nowhere. After navigating through the crowds in Harrods and after dealing with them at the various bus stops, I began to dream of being in the middle of nowhere. I'd had my fill of crowds.

Only once throughout the entire day had I seen an older person using a cane. Only once. No motorized scooters. No wheelchairs. London is for the young, and for those with all their body parts working properly. As I carefully stretched out on the bed with water in one hand and the television remote in the other, Denis made the very short journey to the London Eye.

After another excellent meal in the hotel restaurant, I hobbled my way back to our room. Denis immediately got online. I took a pain pill, finished packing, and looked through all the photos that we'd taken. I'd racked up a lot of memories in one day.

It occurred to me that it had been almost two weeks since I'd been on a computer. I didn't miss it a bit. Not once. It was then that I made the decision to never bring a laptop with me when we're traveling. Less to pack. Less to lug around. And a better chance of being aware of the world around me. Friends and family wanting updates would either have to rely on Denis or wait until I got home. Wait until I got home? Well-- it's what we used to do, isn't it? Once in a blue moon, I decide to be old-fashioned.

All that was left was getting to the airport, surviving any Heathrow hassles, and flying home. You'll be able to read the last chapter of my travel tales on Wednesday, November 18, when I talk about Harrods and Heathrow.

Email ThisBlogThis!Share to TwitterShare to FacebookShare to Pinterest
Labels: England, Get to Know the Blogger, London, Travel