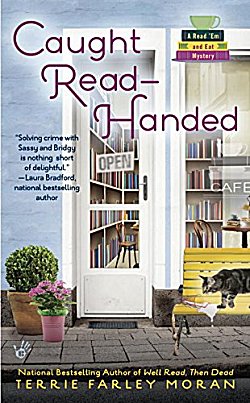 Tanya Lipscombe-- known by Fort Myers Beach locals as "Tanya Trouble"-- is found dead in her hot tub, and the man she was seen arguing with at the library is arrested. But Alan Mersky is a veteran with Post Traumatic Stress Disorder and the brother of Sassy's former boss. Sassy calls her old boss to tell him the news, and the family rushes there to be with Alan. The investigation is moving much too slowly for Sassy and Bridgy, so when they're not busy running their Read 'Em and Eat bookstore cafe, they're on the trail of the real killer.

After reading and enjoying Well Read, Then Dead, I found that this second book in the series fell a bit flat for me. Part of the reason for this is the character of Aunt Ophie, a Southern belle type that just rubs my fur the wrong way (although I know she's meant to be cute, eccentric, and colorful). In the first book, Ophie was amusing because she'd been called in as replacement chef and wreaked havoc in the Read 'Em and Eat kitchen. In this book, she's out of the kitchen and into her true milieu: gossipmongering and flirting. Flirting I can take or leave, but I truly can't stand gossips. Ophie's niece Bridgy gets into the act as well when both of them gang up on Sassy to force her to tell them everything they think she knows about something. Sassy eventually caves. I wouldn't. Anyway... you can see that I was having a major problem here!

Each table in Sassy and Bridgy's cafe is decorated with things representing different authors, and the author usually mentions the specific table at which the characters are seated. I like the idea for the tables, but the constant reference to each one by its author's name stops being cute and starts getting a bit stale and affected rather quickly.

When Sassy calls her former boss, he, his wife, and his sister all come to Fort Myers Beach. I can see why they would. Makes perfect sense. But once they're in town, they have very little to do and they slow the story down.

So far all I've done is complain, but that's so I could then concentrate on the good stuff-- and there is quite a bit of that in Caught Read-Handed. There is a subplot involving an anaconda snake on the loose threatening the local pets, and Miguel, cat owner and chef of Read 'Em and Eat, is very vocal about the need for action. I liked how this subplot played out with locals getting together to do something logical to take care of the problem. (And some of Miguel's recipes made my mouth water!)

Another aspect of the book that I enjoyed was the scenes with the teen book club. Several book clubs hold meetings at the Read 'Em and Eat. The clubs are for all ages and run the gamut of genres, but I particularly enjoyed reading how the teens reacted to different books.

Last but not least in the list of the good things in this book is the mystery, which did indeed keep me guessing.

If you don't have any aversion to the types of characters who annoy the stuffing out of me, you're going to get a lot more pleasure from this book than I did. Caught Read-Handed is a good, solid book that will please almost everyone who reads it. But when I think of Aunt Ophie and Bridgy, I'm left with doubts.