A Christmas Howl by Laurien Berenson 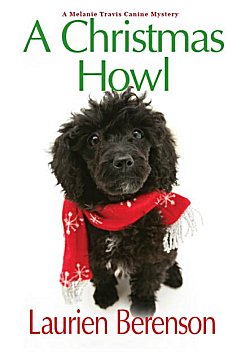 When Christmas rolls around in Greenwich, Connecticut, all Peg Trumbull wants to do is spend the holidays snuggling up with her husband, Max, and their pedigreed Standard Poodles. But when Max's estranged brother invites them to Christmas dinner, Peg's dreams are dashed. There's been a long-standing feud between the brothers, and Peg just doesn't want to deal with it.

But naturally they go. Peg is amazed at how much Melanie has grown up, but she's so... uninteresting! And she hasn't been there long until she's convinced that Max is hiding some sort of secret beneath all his holiday good cheer. She's determined to get to the bottom of it.

I've run across this series several times over the years, and the covers-- which usually have adorable dogs on them-- always catch my eye. When I saw this digital holiday short story, I decided to give it a try to see if the series might be something I want to read. I also liked the idea that it was a prequel; I wouldn't feel as though I were walking in at the tail end of a joke and not understanding the punch line.

I enjoyed "A Christmas Howl." Peg Turnbull is a character whom I would like to get to know better, and it certainly would be interesting to see how Melanie changes from uninteresting college student to Peg's sleuthing partner. Dog lovers like me are also going to like the canine aspect of the story. If you're put off because Peg raises Poodles, shame on you. Look past the silly haircuts! Poodles are second only to Border Collies in intelligence. They just haven't been able to train all their owners to stop the frou-frou business.

As a prequel to a long-running mystery series, there isn't much of a mystery, but it's a good introduction to what's in store. I've learned over the past couple of years that these digital short stories are excellent for letting me "test the waters" of a new-to-me series. Berenson's "A Christmas Howl" has convinced me to spend more time with her characters.