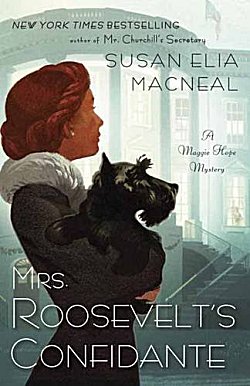 First Line: It was morning and Eleanor Roosevelt opened the door of the President's bedroom without knocking.

Shortly after the attacks on Pearl Harbor, Winston Churchill arrives in Washington, D.C. He's there to work with Franklin Roosevelt concerning the U.S.'s entry into World War II, and Maggie Hope is along, posing as Churchill's typist.

When one of Eleanor Roosevelt's aides is murdered and the First Lady herself implicated in the crime, Maggie finds herself quickly drawn into Mrs. Roosevelt's inner circle. Fortunately Churchill's "typist" is skilled at code breaking and espionage because her investigation has to be kept secret. Who would target the First Lady-- and why? What Maggie uncovers is a conspiracy that must be stopped.

Any reader who's a fan of Jacqueline Winspear's Maisie Dobbs or Charles Todd's Bess Crawford should definitely give Susan Elia MacNeal's Maggie Hope series a try. I've been a MacNeal fan since the first book in the series, Mr. Churchill's Secretary. There's something about a strong, intelligent female faced with the world at war that pulls me right into a story-- if it's well written-- and MacNeal's books certainly are.

I like how the author weaves fascinating historical facts into her stories. This time the subplot featuring wrongfully accused Wendell Cotton and his defender Andi Martin are based on fact and highlight Eleanor Roosevelt's activism. This subplot also serves to illustrate the President and First Lady's desire to help the disenfranchised-- and how much they were disliked for it in certain circles. FDR had to tread carefully in order to get approval for his most important legislation-- like America's entry into the war. Eleanor found this extremely distasteful and tried to circumvent her husband's caution and political maneuverings. This would make her a perfect target for the sort of plot MacNeal has created.

Once again both fictional and historical characters come to life, although I do wish there were fewer references to Franklin's and Eleanor's teeth. FDR's daily routine, his love of martinis, Eleanor's direction of food and hospitality in the White House-- even a quirk or two of Churchill's all ring true and revved up my enthusiasm even more. Add bugged rooms, wire tapping and the like, and you've got a fast-paced story of which you must know the outcome.

Everything was wrapped up rather abruptly at the end, which leaves me wondering what Maggie will be up to in the next book. If you're new to the series, do you have to read them in order? I would advise it because of various events in the series' timeline and because Maggie's character grows and changes throughout. But if you're caught up with Maisie and Bess, you've got time for a new series with a strong female lead, don't you? Even if you don't, Maggie is certainly worth making time for!