A Death in the Family by Michael Stanley 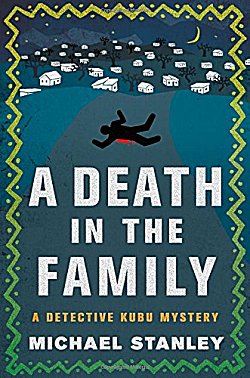 The smartest detective in the whole of the Botswana police, Assistant Superintendent David "Kubu" Bengu, is thrown headlong into a nightmare. Why in the world would someone want to murder his father, Wilmon, a good, frail man suffering from Alzheimer's? Kubu has no idea, but he is determined to catch the killer as quickly as possible-- which is problematic since his boss forbids him to be involved in the case.

Rationally, Kubu knows that he shouldn't be part of the investigation; it could taint any potential evidence they find and let the murderer go free. But he's feeling anything but rational. Director Mabaku is glad he can send Kubu off to check into the apparent suicide of a government official, and when the Assistant Superintendent gets there, he finds a murky picture of Chinese mine owners, a mysterious man with connections to the U.S. Embassy, and lots of possible corruption. But no matter how intriguing this suicide is, nothing is going to keep his mind off catching his father's killer.

In some ways, A Death in the Family is a departure for this wonderful series. Having read all the books with tremendous enjoyment, I know that Kubu has always had a close and loving relationship with his parents. Wilmon Bengu's death is catastrophic for Kubu. Kubu has been in many tight situations, but readers have never seen him grief-stricken or enraged. He comes within a whisker of throwing his entire career away. He scarcely eats throughout the book, and Kubu is a man who has always been passionate about his food. His impatience, his frustration, his grief are felt throughout the book like a steady but subtle vibration in the air. Kubu's frame of mind will make readers turn the pages faster and faster in order to unmask the killer.

The investigation in A Death in the Family is a very complex one with many threads, and it was fascinating to watch those threads being pulled out, examined, and woven into a satisfying conclusion. The facts the writing team of Michael Stanley includes in the story are fascinating. Yes, we learn more about the inner workings of the Botswana government, but it's Wilmon's struggles with Alzheimer's and this country's funeral traditions and those of kgotle (a structured and rather familial type of town meeting) that add so much texture and richness to the book.

Is an angry Kubu as readable as a funny Kubu? Most definitely! If you love Alexander McCall Smith's The No. 1 Ladies' Detective Agency books, are you going to like Michael Stanley's Detective Kubu? Chances are very good that you will. To be honest, I prefer Kubu to Precious Ramotswe-- there's a bit less charm and more bite to the stories of Michael Stanley. You can step in just about anywhere in these books, but Kubu's life isn't an unchanging one. Start at the beginning with A Carrion Death so you won't miss one little bit of my favorite-- and the best-- detective in Botswana. The entire series is excellent.