Fall of Man in Wilmslow by David Lagercrantz 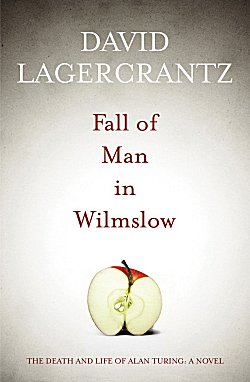 First Line: When did he make up his mind?

It's June 8, 1954, and Detective Constable Leonard Corell is in charge of the investigation into the death of a mathematician named Alan Turing. It's pretty cut and dried: death by poisoned apple, but Corell is intrigued by all the official secrecy over Turing's war record. He was a convicted homosexual-- he couldn't have been in charge of much during the war, could he?

When Corell stumbles across evidence that Turing was a genius, he becomes enthralled and begins to dig deeper into the man's life. But his innocent curiosity has taken him far beyond his depth, and DC Leonard Corell is about to learn how deadly serious those secret intelligence agencies can be.

Anyone who picks up Fall of Man in Wilmslow believing it to have the lightning pace and other qualities befitting a thriller is in for a shock. I've seen snails move faster than the pace of this book, and although it satisfies a bit here and there, it certainly doesn't in most areas.

There are biographies of Alan Turing that will tell you more about this fascinating and cruelly treated man than Lagercrantz's novel. Instead it's more of an exploration of the character of Leonard Corell, a young, dissatisfied man who feels as though he's never lived up to his childhood dreams and potential. During the course of the book, Corell will learn just as much about himself as he will about Turing.

As he begins to investigate, his beliefs are colored by witch hunters who firmly believe all homosexuals are evil Communist spies; however, his opinions change the more he learns about the dead man.

It was a fight to keep my interest in this book. There are just too many deadly dull pages of math, theory, and philosophy-- and I will be the first to admit that those subjects work better for me as personal cures for insomnia. So yes, I skimmed. The book only truly came to life when Corell spoke to people who actually knew Turing, but that didn't happen often enough.

As an exploration of a young man's character, Fall of Man in Wilmslow is a very modest success. On almost every other score, it came up lacking.

Fall of Man in Wilmslow: The Death and Life of Alan Turing
by David Lagercrantz
Translated from the Swedish by George Goulding
ISBN: 9780857059895
Maclehose Press © 2015
Hardcover, 368 pages