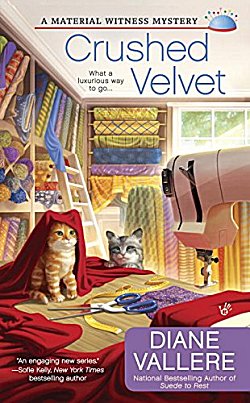 First Line: The crash was louder than I expected.

The opening day of Poly Monroe's fabric shop, Material Girl, is fast approaching, and she still has a few problems to sort out-- like the big sign above the door. She doesn't need any more stress, but that's exactly what she gets when she finds her friend's husband crushed beneath dozens of bolts of velvet. Somehow Poly has to get her store open on time and clear her friend Genevieve of a murder charge. The folks in town are missing their daily tea fix!

Diane Vallere's Material Witness series is probably my favorite new cozy series. In Crushed Velvet, you'll find a very good mystery with plenty of misdirection, although it's not Poly's fault. She keeps trying to shove Sheriff Clark in the right direction-- she knows that her shipment of velvet has something to do with the murder-- but the "something" turns out to be a total surprise.

Vallere has also assembled a first-rate cast. Poly is a perfect blend of smarts and sass, and it's a pleasure to follow her around while she's investigating. Genevieve (tea shop owner) and Charlie (resident mechanic) not only have interesting backgrounds of their own, they make the best kind of girlfriends for Poly. And the chemistry between Poly and Vaughn sizzles and pops as they stumble around getting to know one another. It's also wonderful to see the main character in a cozy series who actually has two loving parents. Too often one parent (or both) behave like escapees from a mental institution. I even have my eye on Poly's busybody next-door shop owner, although I don't know if I want her to be the dead body or just charged with murder. (Can you tell I'm enjoying these books?)

Another facet in this Material Witness series is the real estate developers and finance companies focused on this small California town. These folks are back deep in the shadows and remind me of vultures waiting for something to die. It can be easy to forget they're there-- but don't.

Like the first book, Suede to Rest, Vallere continues to lure me with fabrics, and I don't even like to sew. In that first book, I was disappointed that Poly didn't finish the transformation of Genevieve's tea shop. Well, she doesn't finish it here either, but the process is absolutely fascinating. Vallere makes me feel as though I've had a hand in it all.

I'm hoping that the opening of Material Girl will be a wild and unequivocal success because I can't wait for the next book in the series!