Do We Not Bleed? by Patricia Finney 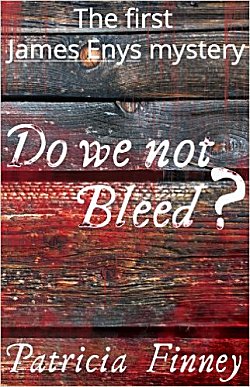 First Line: Maliverny Catlin was drunk, which was unusual for him.

Whores are being hideously butchered in Elizabethan London, and those who survive want justice for their sisters. Lawyer James Enys has been called in to solve the murders, and the case is definitely one he must solve. If he doesn't, he'll be charged with the crimes himself. The mob wants blood and isn't too particular about whose it is.

James Enys isn't the man he appears to be. He has an ace or two up his sleeve. One is a certain bald young playwright who's been known to write a sonnet from time to time, and the other is his sister. For this investigation requires Enys to follow the evidence into the closed world of Elizabethan women-- a place into which he cannot go. Hence the importance of Enys's sister, Portia. She is every bit as intelligent as her brother, and extremely observant. So what if she's never seen in public at the same time as James? Only Shakespeare has guessed James Enys's secret, and it's a secret that just may help the lawyer solve these vicious murders.

Patricia Finney knows how to drag readers right into the midst of life in Elizabethan London with all its sights, sounds, and smells. Yes, the murders are vicious (shades of the much later Jack the Ripper), but Finney is a pro-- leavening the action with laugh-out-loud humor in just the right places. From Shakespeare's chicken-raising landlady to people's reactions to James or his sister Portia, we laugh and we can also learn, as when one indignant woman exclaims that no decent woman wears underpants. (How times have changed!) It's also a time in which no decent woman can go out alone without an escort, and this causes James's reclusive sister the occasional problem.

The story moves along at a fine pace, and I was keeping a close eye on two particular suspects. I was half right, and the resolution was a surprise, which is always a plus. I look forward to Finney's next James Enys adventure with a great deal of anticipation. Her deft ways with all the major ingredients of storytelling-- plot, pacing, setting, characters, and humor-- make her books an absolute pleasure to read. A minor quibble with this Kindle edition of Do We Not Bleed? was its numerous instances of bad formatting, but I'm sure those will be corrected when next I see Mr. Enys... and Peter the Hedgehog. I have a feeling that that little boy is bound to cause trouble the next time I see him!