Dog in the Dark by Gerald Hammond 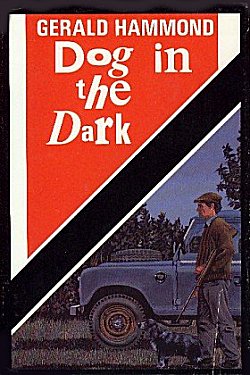 First Line: I glanced over my shoulder to make sure that I was not leaving the judges behind and at that moment the Gun to my right fired a shot.

A veteran of the Falklands war, John Cunningham has been invalided out of the army and is tired of living with his brother and sister-in-law. It's time to get a place for himself. So when he hears of a likely place called Three Oaks close to Fife in Scotland, he goes to take a look. He likes what he sees, and in quick time Cunningham is the owner of his own kennel and dog breeding business. He also has a partner, veterinarian Isobel Kitts, and a kennel nanny named Beth.

What he didn't fully realize when he moved to Three Oaks is that one of his closest neighbors breeds show dogs. Cunningham has little use for show dogs and lets his feelings be known. Chalk up one enraged neighbor-- and when that neighbor is killed, chalk up one John Cunningham as a prime suspect. If he's going to pursue his dream, he's going to have to clear his name first.

This is the first book by Scottish writer Gerald Hammond that I've read, and it won't be my last. Dog in the Dark is characterized by a well-plotted mystery, three fleshed-out primary characters that readers grow to know and like, and a simple, straightforward prose style that's like slipping into your favorite pair of flannel pajamas on a cold winter night.

John Cunningham isn't your usual main character. He's hounded by a mysterious ailment that strikes suddenly and repeatedly, leaving him weak and in bed. He's smart and observant, and when he isn't solving the mystery, he's sharing lots of lore on dog training and breeding.

Gerald Hammond's writing isn't flashy, and it's not going to make you sit back and murmur, "Wow!" It's not the kind of writing that wins tons of awards. But sometimes quiet is the best. Sometimes quiet slips a lot more past you. When I finished reading Dog in the Dark, I sat back and thought to myself, "Now, I really liked that! I want more."