Dead in the Water by Aline Templeton 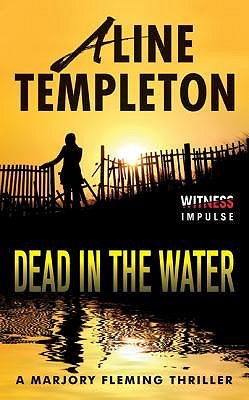 First Line: "Well, I think we could confidently state this has been a complete disaster, DI Fleming."

Acting Procurator Fiscal Sheila Milne doesn't like Detective Inspector Marjory Fleming, so when a case "Big Marge" worked on doesn't go to Milne's plan, she extracts a bit of revenge. Fleming is given a twenty-year-old cold case involving the death of a pregnant young girl-- a case Fleming's own father worked on in 1985.

The trail has long ago grown cold. The girl's father is dead, and her mother refuses to say a word about what went on back then. When Marjory begins to dig deeper, it becomes crystal clear to her that her own father kept secret some of the details of the case. Fleming idolized her father, and this information is a stunning blow because-- by all accounts-- her father was strictly a "by the book" police officer. Once she uncovers the truth, is she going to be able to handle it?

Aline Templeton's Marjory Fleming series is one of my very favorite character-driven crime fiction series, and Dead in the Water is yet another strong entry. This is a book about mistakes. Mistakes people may have made back in 1985-- including Marjory's own father. Mistakes involving the ever-perfectionist Sheila Milne. And Marjory's own mistakes made both on the job and in her private life.

Naturally once Fleming gets to work on the cold case, the local bad boys get busy so more work gets thrown on her desk. It's like kicking open an anthill. There's a stalker at the estate where there's a film shoot on location. An area thug who likes to use knives is busy. There are short-fused Polish laborers working for a couple with too much time and money on its hands. And when all of this comes to a head, Marjory's personal life goes into a tailspin. Yes, there are a lot of plates spinning in the air, but Templeton is an expert at keeping them all going, keeping them all interesting, and keeping them all from getting tangled up and confusing.

She's also an expert at creating three-dimensional characters that readers really grow to care about. For instance, one of the decisions Marjory makes practically had me frothing at the mouth in agitation, and in fact I was talking out loud. Yes. Talking out loud. To a fictional character. I wanted to get hold of her and shake some sense into her. When I get this involved with characters, I know they're good-- and I know the story is good as well.

And Marjory isn't the only character who could sit down at my kitchen table. There's her husband, her children, her mother, and Detective Sergeant Tam MacNee, he of the infuriating behavior and brilliant flashes of deduction. I can always count on Tam for a little comic relief when a situation becomes too deadly serious.

After yet another satisfying ending to a puzzling mystery, I have to ask myself why I read these books so slowly. They are so good, you'd think I'd swallow them all whole, one after another. Ah-- but that's the reason why I read them slowly. They are "go-to" books for me. I know I can depend on them for their consistent high quality-- and you can, too. Dead in the Water reads well as a standalone, but if you like this type of mystery, I'd suggest you begin at the beginning (Cold in the Earth). You are definitely going to like Big Marge.