The Blood Detective by Dan Waddell 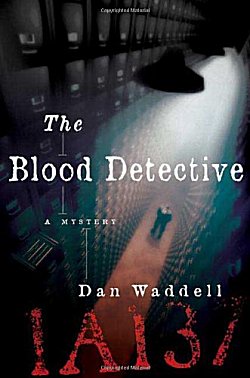 First Line: Detective Chief Inspector Grant Foster, stiff from lack of sleep, dragged his tall, weary frame from his brand-new Toyota Corolla, feeling the familiar ache of being hauled from his bed in the middle of the night.

The body of a naked, mutilated man has been found in a Notting Hill graveyard, and the only clue is a series of carved letters and numbers on the man's chest. Detective Chief Inspector Grant Foster and Detective Superintendent Heather Jenkins don't have a clue what they mean until family historian Nigel Barnes joins their investigation.

As more bodies turn up and with no clues to be found in the present, it's up to Barnes to search the archives to solve a 100-year-old mystery. Only then will the team be able to catch a murderer and put an end to the killings.

There's a nice little subgenre in crime fiction that's all about genealogy and how crimes committed in the past have a way of causing even more grief in the present. As main character Nigel Barnes says, "Anyone who seeks to forget the past has a corpse in the basement," and that's exactly what's happened in The Blood Detective. A crime was committed in the past and swiftly forgotten by almost everyone. Notice I said "almost."

Waddell has an excellent cast to solve this mystery. Nigel is young, intelligent, and passionate about family history-- well, all history for that matter. He's not without his own skeleton in the closet, and as soon as I knew what it was, I was watching carefully to see how he deals with it. I'll leave that for you to discover for yourselves. His two police colleagues are interesting in their own ways. Heather Jenkins is the likable one of the pair, and although I really didn't care much for Grant Foster (I keep hearing that line from an old commercial, "Who's behind those Foster Grants?"), I certainly appreciated his character being fleshed out more by book's end.

The story in The Blood Detective is a bit like that snowball going downhill, gaining size and momentum till the powerful crash at the end. I enjoyed the journey, possibly because there are no clues to be found in the present. Barnes has to spend a lot of time in newspaper archives and records offices to piece everything together, and watching how he does it is fascinating. History and genealogy really do solve this crime. And Barnes' habit of tossing out name origins as he goes along? Pay attention. (Just a word to the wise. Besides, they're fun.)

I almost added this book to my Best Reads of 2015 list except for one thing, and it's something that doesn't happen to me very often. One scene toward the end was over-the-top with the pain and gore quotient. It had me tied up in a Gordian knot of quivering sympathy pain. I think of it as the "Annie Wilkes on steroids" scene. Be that as it may, I really enjoyed this book. Dan Waddell has joined fellow Englishman Steve Robinson in crafting mysteries steeped in family history that I just don't want to put down. I'm looking forward to meeting Nigel Barnes again-- soon!