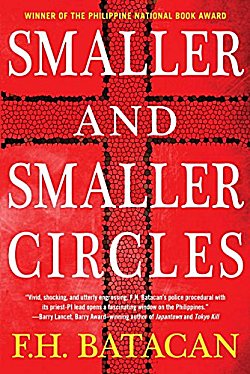 First Line: Emil is running after his slum kids, panting in the noonday sun, loosening the high collar of his shirt as he goes.

It's 1997 in Quezon City, the Philippines, and the general consensus is that there's no such thing as a serial killer in the entire country. Many may believe this, but two Jesuit priests do not. The bodies of mutilated young boys are being found in the local garbage dump, and when National Bureau of Investigation Director Lastimosa asks Father Gus Saenz and Father Jerome Lucero to help in the search for the killer, for these men saying no was never an option.

Smaller and Smaller Circles has been called the first Filipino crime novel, and it was a pleasure to read-- mostly for its depiction of life in the most poverty-stricken area of Manila.

Batacan's novel moves slowly and deliberately in uncovering a killer, and the pace was something I expected from the title of the book itself. It takes time to move in smaller and smaller circles, time which Batacan uses to show the poverty of the area, the importance of the Catholic Church within it, and the all-pervasive government corruption. The plot really has little that's new, but I didn't mind because I enjoyed the setting and the characters so much.

Father Gus Saenz, a forensic anthropologist, and Father Jerome Lucero, a psychologist, have a father/son relationship that's often humorous and at times touching. Saenz runs his laboratory on a shoestring, and the shoestring is so old and frayed that most doing forensics in the U.S. would be completely horror-stricken. He is the conscience of Smaller and Smaller Circles. He has decided beliefs on what should be done with pedophiles in the Church, and his opinion of socialites' involvement with charities mirrors my own. Director Lastimosa seems to be the last honest man standing in government. One of the reasons why he reaches out to the two Jesuits is because he wants this investigation to be conducted honestly-- not swept under the rug as would normally be done with the deaths of children in such poor circumstances. Also demanding a role in the investigation is telejournalist Joanna Bonifacio. Too old for television and with a voice like a cross between Lauren Bacall and Bela Lugosi, Joanna has lots of experience in ferreting out deeply buried facts, and her presence is needed to lighten a cast of "good guys" which has strong overtones of religion and nobility.

Yes, F.H. Batacan may have written the first Filipino crime novel, but it's even more important as a portrait of a country, and that makes it very good reading indeed.