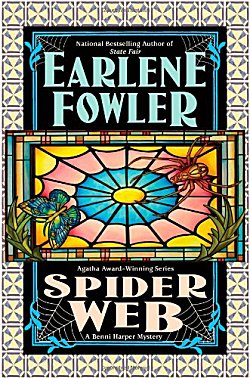 First Line: Music flowed out of the old ranch house's open front door like a wash of honey water-- "Are You Lonesome Tonight?"

Somehow Benni Harper has found herself in charge of San Celina's Memory Festival-- a celebration of recollections and loved ones through crafts. It's been a lot of work, but Benni feels that the festival is going to be a success. That is, until a sniper with a vendetta against law enforcement begins shooting at local police officers. Now Benni not only has to make sure this festival runs smoothly, she has to find a way to keep her police chief husband safe.

I've been a fan of this series since its inception, and in many ways I think this fifteenth book is the strongest of them all-- which is saying a lot. There's quite a bit going on in the book: that sniper shooting at police officers, a mysterious woman following Benni around, the Memory Festival, working on photographer Isaac Lyons' latest book, and-- the coup de grâce-- Benni's husband Gabe showing signs of Post Traumatic Stress Disorder. But none of the plot threads are rushed, and all of them blend seamlessly into a story that's hard to put down.

There's some serious stuff going on in Spider Web, but Earlene Fowler knows how to add just the right touches of comic relief; most notably the octogenarian ladies of the Coffin Star Quilt Guild, and sisters Dove (Benni's grandmother) and Garnet (Benni's aunt). Dove and Garnet are the type of sisters who love to fuss and squabble with each other, but you can feel the love between them. These ladies have been studying something called cane fu, and all I can say is... if you see an older person with a cane who mentions taking lessons in this discipline, I wouldn't do anything untoward unless I were out of cane's reach. Just sayin'.

Fowler has proven time and again that she can hold her readers in the palm of her hand. She's created a superb cast of characters whom I care for deeply. When one of them is in danger, my heart is in my throat. I've also laughed myself silly, and shed tears of joy and of sorrow. Her series is imbued with a deep and abiding faith. For those of you unfamiliar with these books and who don't care to read anything remotely religious-- don't worry. This is faith done the way it should be. None of these people thump their chests and proclaim what good Christians they are. These folks see what needs to be done, and they quietly roll up their sleeves and get it done. No strings. No homilies. Just a simple matter of doing the right thing. Reading books like Spider Web can make you feel as though there is some good in the world after all.

Fowler is on a self-professed writing sabbatical, and for all intents and purposes it looks as though this is the end of a wonderful series. It's one that I've grown with over the years. From the beginning when I didn't like Benni's husband or grandmother and doubted I'd continue reading, all the way to now when I'm so glad that I read each and every one. Earlene Fowler's characters grow and change as the years pass. Just as real people do. Just as I have.

And isn't that a marvelous thing to say about a series of books?