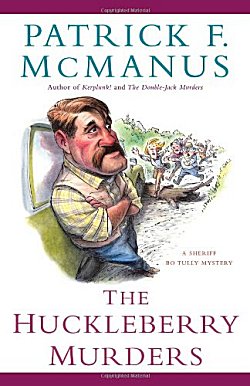 [As I've said elsewhere, I've been doing so much reading that I have a stack of book reviews piled so high that I can't see over it. The only thing for me to do is to go into "Cathy's Quickies Mode": whip up some shorter reviews that will-- hopefully-- still let you know how I feel about the book. Here goes!]

Sheriff Bo Tully is convinced that retiree Orville Poulson has been murdered by his ranch caretaker. Supposedly Orville's off somewhere fishing around Spokane, but Bo doesn't buy it. Now if he could just prove his hunch. Before he can, three young men are shot execution-style, their bodies left in a huckleberry patch up on a mountain. When a female FBI agent shows up to take over the case, Bo finds himself busier than a one-armed paperhanger with the hives.

I enjoy McManus's Bo Tully mysteries. Even though they're played more for laughs than police procedure, I'd still like to get Tully together with my other two Stetson-wearing sheriffs, Walt Longmire and Bill Gastner. Tully is so busy in this one, that it appears that he's ignoring a woman who insists that her ex-husband has been murdered. Notice how I say "appears."

McManus's humor is reminiscent of Mark Twain, and I loved how all the pieces of the puzzle fit together in this one. I recommend this entire series to anyone with a fondness for light-hearted mysteries featuring a good old-fashioned lawman who believes in using cunning and guile to solve crimes. Good stuff!