The Crack in the Lens by Steve Hockensmith 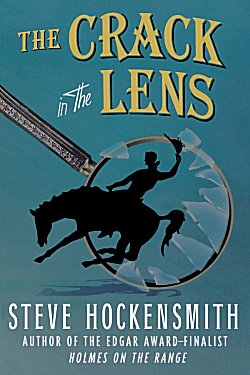 First Line: "Stop right there or I'll blow you outta your damn saddles," the fellow with the shotgun croaked, and he and two pals rode slowly out of the nighttime shadows shrouding the woods by the side of the road.

Will wonders never cease? For the first time since we've known them, the Amlingmeyer brothers have a bit of spending money and the time to do something with it. Without further ado, Old Red tells his younger brother that they're going to San Marcos, Texas, to find out who murdered his sweetheart five years ago. Old Red's looking for justice, and he's not going to let the silence of the townspeople stop him-- even if he has to make adjustments to his "deducifying" methods.

Steve Hockensmith's Holmes on the Range series is one of my favorites. So much so that I make myself parcel each book out very slowly. There haven't been any new ones since 2011, and I only have one left to read now. (Horrors!)

Hockensmith really gives us the flavor of the Old West in these books, and The Crack in the Lens is no exception. The trademark laugh-out-loud humor is also there. But there's a departure or two in these pages. For one thing the brothers actually have some money this time around, and hopefully the reason why will tickle you as much as it did me. Another departure is that, in this fourth book in the series, Old Red is the loose cannon and Big Red is the calm one. Odd how love can throw both Gustav Amlingmeyer and his idol Sherlock Holmes for a loop.

The mystery is a good one, and the killer is hiding in my favorite spot: right out in plain sight. If you like Sherlock Holmes, the Old West, humor, and a good whodunnit, take my advice. Introduce yourself to the Amlingmeyers!