A Deceptive Homecoming by Anna Loan-Wilsey 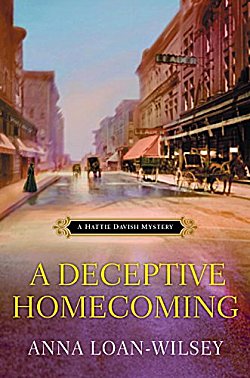 First Line: And then it was my turn to view the body.

Hearing the news of the death of her good friend's father, traveling secretary Hattie Davish returns to St. Joseph, Missouri. She may be back in her hometown due to sad circumstances, but she is looking forward to seeing people again. However she's in for a rude awakening. Her friend Virginia behaves as though Hattie is the last person she wants to see. Virginia's father's death is more than a bit mysterious, and there are problems at Hattie's alma mater, Mrs. Chaplin's School for Women.

When Hattie begins to investigate the incidents at the school, her search for the truth leads her from the town cemetery to an outlaw's home-- and into the tunnels beneath the State Lunatic Asylum.

In this fourth book in the Hattie Davish historical mystery series, Hattie has some ghosts that she must lay to rest, and she does even though her investigation has her traveling from one spot in St. Joseph to another-- and trying to avoid an old boyfriend at the same time. There are several plot threads in A Deceptive Homecoming, and author Anna Loan-Wilsey deals with them with ease. One of the reasons why I enjoy the character of Hattie Davish is that she is an inveterate list maker (like me). Whenever she has a moment or is trying to think something through, she'll sit down and update her list of questions. Not only does this practice keep her thoughts organized, it helps readers think the mystery through themselves.

There are some serious topics in this book. An old friend who behaves like an enemy. Hattie's beloved alma mater is under some sort of attack. Something's not quite right at the State Lunatic Asylum.... Fortunately the author doesn't keep everything deadly serious all the time. One of the parts of the book that I enjoyed the most involved Hattie being forced to deal with her fame: she's being idolized by many of the students in Mrs. Chaplin's School. Many, but not all, the girls are starstruck, and Hattie is fun to watch when she's in situations with the girls.

There is one scene in A Deceptive Homecoming that had me thinking that Hattie was too stupid to live-- normally a deal breaker for me. When she got past the reception area in the State Lunatic Asylum and began following someone deep down into the bowels of that creepy place, my eyes rolled so far back into my head that they almost stuck. Since I did indeed finish reading the book and have written this review, you can tell that Hattie redeemed herself in some way. (But I'll be keeping an eye on her!)

Anna Loan-Wilsey's series is light and fun to read, and it also manages to highlight historical personages and incidents that are downright fascinating. I look forward to traveling with Hattie and her typewriter again in the future.