The Darkness Rolling by Win and Meredith Blevins 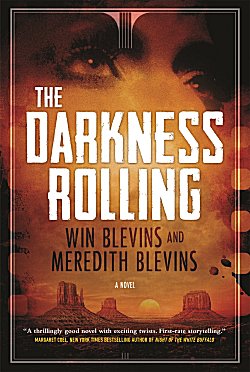 First Line: I was itchy.

Seaman Yazzie Goldman served his country during World War II as a member of the shore patrol on the California coast. It's been a long time since he's last seen his family's trading post in Monument Valley, and a lot of things have changed. His beloved grandfather, Moses Goldman, suffered a debilitating stroke, and although Yazzie's mother Nizhoni is doing the best she can, money is scarce and the trading post is slowly falling apart.

Yazzie quickly finds a way to help pay for badly needed repairs and supplies: he's hired on by film director John Ford to serve as a translator and as a bodyguard for actress Linda Darnell, who's been receiving threatening letters.

But Yazzie isn't the only person to come home recently. Zipilote, "the Buzzard," has spent the last twenty-five years in prison, and now he's back in Monument Valley with only one thought in mind: revenge against the two who sent him to prison-- Yazzie's mother and grandfather.

I love Monument Valley. I've stayed at Goulding's Lodge where the stars and film crews stayed while filming so many classic Westerns back in the 1940s and 50s. I've had a Navajo guide take me through not only Monument Valley, but the lesser known (and equally impressive) Mystery Canyon. I was thrilled to see that a new mystery series was set here during its Hollywood period.

The Blevins use this glorious setting to excellent effect and manage to blend in some Navajo traditions as well. The distances involved in bringing in supplies and My Darling Clementine's stars show how remote the area is. In fact, Yazzie gets to travel on the Atchison, Topeka, and the Santa Fe's Super Chief and stay at the fabulous Fred Harvey hotel La Posada in Winslow in order to pick up actress Linda Darnell and take her to where the filming is being done.

But it's with Linda Darnell that the book frayed around the edges a bit for me. I've read many historical mysteries, and quite a few of them have historical characters. I normally don't have a problem with that, but I did with the role Darnell plays in this book. I won't go into detail here, and I'm sure the Blevins did their research, but Darnell's characterization just plain made me uncomfortable.

The best secondary character by far is Moses Goldman, and it's easy to see why Yazzie loves him so much. I cheered Moses on in several of his scenes.

Unfortunately other than as a foil for the other characters, Zipilote doesn't really work as a killer for me-- much too one-dimensional. But then... I suppose most homicidal maniacs are.

I like Yazzie, a young man who's half Navajo, half Jew. He wants a "big life" but he still remains level-headed. His time as shore patrol for the Navy has given him a good background in investigating, and he needs it here because when things go wrong-- since he's the Indian in the middle of a bunch of famous white people-- he's the person who gets all the blame. He's also the man who gets all the women in this book, and his second relationship moved so quickly that I'm wondering how well it's going to fit in with the series.

For yes, this is going to be a series, and even though I'm not thrilled with some of the characterizations, I like the main character, and I'm still in love with the setting. I'm looking forward to the next installment.