Death in Brittany by Jean-Luc Bannalec 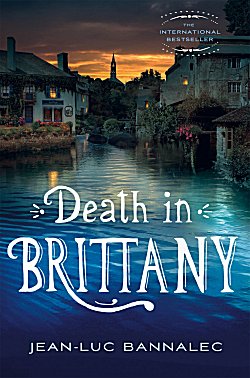 First Line: The seventh of July was a magnificent summer's day, one of those majestic Atlantic days that always lifted Commissaire Dupin's spirits.

Recently relocated from Paris, Commissaire Georges Dupin enjoys his posting to the remote coast of Brittany, especially when his morning coffee and croissant are undisturbed. Unfortunately Dupin is called away from his daily ritual by a murder in nearby Pont-Aven. Pont-Aven is a small village where everyone knows everyone else. It's at the height of the season, and many tourists are coming to see where the famous artist Gauguin once lived. The last thing Pont-Aven needs is a murder, but that's exactly what's happened.

Someone has killed 91-year-old hotelier Pierre-Louis Pennec, and it's up to Dupin and his men to find the murderer. They soon find five principal suspects, and it's going to take a lot more digging to find out which one "done it."

Bannalec has written a mystery with a marvelous sense of place, complete with some of its fascinating historical background. His descriptions are so vivid it was easy for me to picture the beautiful setting. The mystery is also a good one, with tie-ins to local history and to Paul Gauguin.

What is lacking in Death in Brittany is characterization. It's all about the investigation here. None of the characters come to life. Dupin's two inspectors become mere minions after very brief introductions. Dupin is constantly saying, "We need to talk," but readers are never allowed to hear what they talk about. Part of the fun of reading mysteries is being allowed to be the proverbial fly on the wall. There's none of that here, and it's missed-- as are more fully fleshed characters.