The Curl Up With a Cozy Four-Book Giveaway! 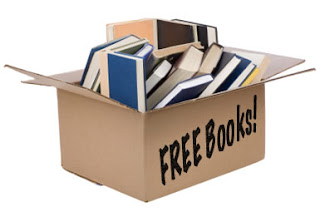 Watch out-- I'm giving away some more mysteries!

I had so much fun at the Death on Demand Party at The Poisoned Pen that I just have to share the wealth.

For this giveaway, I have four autographed cozy mysteries to give away. I'm splitting them into two groups of two, so two lucky winners will be getting some books in the mail!

Here are the books I'm giving away, along with a synopsis of each: 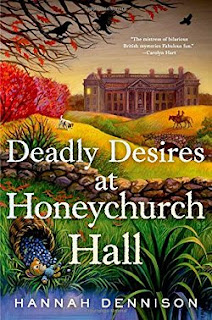 
When the body of a transport minister is discovered in the grounds on Honeychurch Hall, suspicion about his unusual demise naturally falls on the folks in the village. After all, who could possibly want a high-speed train line built in their front yard?

News of the murder soon reaches our heroine Kat Stanford's nemesis Trudy Wynne. A ruthless tabloid journalist and the ex-wife of Kat's discarded lover, Trudy is out for revenge. She is also interested in exposing--and humiliating--Kat's mother Iris, who is secretly the international bestselling romance writer Krystalle Storm.

As the body count begins to build, Kat becomes inextricably embroiled in the ensuing scandal. Is the minister's death the result of a local vendetta, or could it be connected to her mother's unusual (to say the least) past?"

This is a hardcover edition. 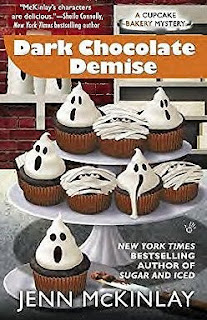 Jenn McKinlay's Dark Chocolate Demise: "Scottsdale, Arizona, may not be the liveliest place on earth, but it’s never been as dead as this. Hundreds of fans have gathered together for the first annual Old Town Zombie Walk, and Mel, Angie, and the Fairy Tale Cupcake crew are donning their best undead attire to sell some horror-themed desserts to the hungry hordes.

But the fun turns to fright when Mel finds a real dead body in a prop casket outside of the bakery’s truck—and the corpse looks alarmingly like a zombie of their own. Knowing that Joe, Angie’s brother and Mel’s former flame, has been working on a dangerous mob case, Mel worries that the murder is a hit gone wrong and that someone near and dear was the real target. To keep any of her friends from winding up six feet under, Mel will do whatever it takes to find a killer—no matter how scary things get..." 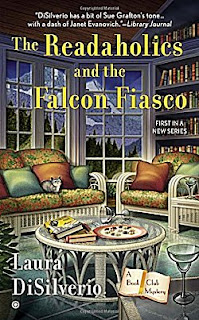 Laura DiSilverio's The Readaholics and the Falcon Fiasco: "Amy-Faye Johnson’s book club, the Readaholics, enjoys guessing whodunit in mysteries like The Maltese Falcon. But when a murder happens in their midst, they discover that solving crimes is harder that reading about them…

Amy-Faye has always loved her idyllic Rocky Mountain town of Heaven, Colorado. Her event-planning business is thriving, her fellow book-obsessed Readaholics are great, and her parents live only a few blocks away. But lately her hometown has felt a little less heavenly. First, she agrees to plan a wedding without realizing the groom is her ex-boyfriend. Then, Ivy, one of her fellow Readaholics, dies suddenly under mysterious circumstances.
The police rule Ivy’s death a suicide by poisoning, but Amy-Faye and the remaining Readaholics suspect foul play. Amy-Faye soon discovers that Ivy was hiding dangerous secrets—and making deadly enemies. Taking a page from her favorite literary sleuths, Amy-Faye is determined to find the real killer and close the book on this case. But finding the truth could spell her own ending…" 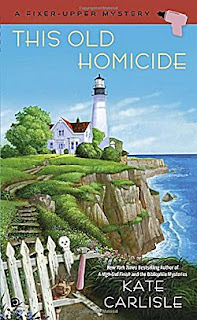 Kate Carlisle's This Old Homicide: "From the New York Times bestselling author of the Bibliophile Mysteries and A High-End Finish comes the second Fixer-Upper Mystery...

Contractor and part-time sleuth Shannon Hammer specializes in improving the quirks and flaws of the Victorian homes in Lighthouse Cove, California. The quirks and flaws of their residents are another story....
Valentine’s Day is approaching, and while Shannon is delighted to be friends with not one but two handsome men, not everyone in town is feeling the love. After her elderly neighbor Jesse Hennessey fails to make his daily appearance at the local diner, Shannon swings by his place to check on him. Not only does she find Jesse dead—of an apparent heart attack—but she also realizes that his home has been ransacked.

Someone suggests that a thief was searching for a priceless necklace Jesse claimed to have retrieved from a capsized sailing ship, but Shannon doesn’t believe it. Everyone knows Jesse had a penchant for constructing tall tales—like the one about him having a hot new girlfriend. But his death is soon ruled a homicide, and shady suspects begin popping out of the woodwork. When another victim turns up dead, Shannon is convinced she must find the killer before someone else gets nailed...."


Those are some great books, eh? Here's how I'm splitting them up: 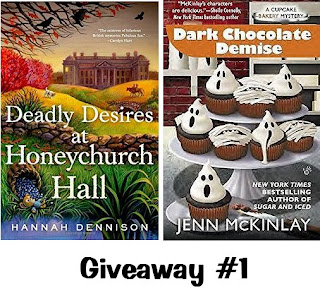 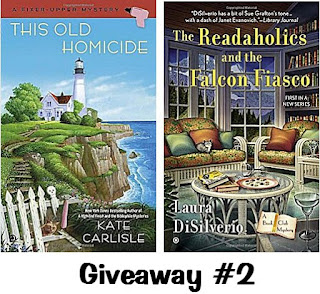 And most importantly, here are...

That's it!  Please remember that, even if you say "both", you will not win all four books, only two. I'll just be entering you in both drawings. Also-- if your email does not include all the information I requested, you will not be entered in the drawings.

Good luck to everyone. These are some wonderful books!