Innocence or, Murder on Steep Street by Heda Margolius Kovály 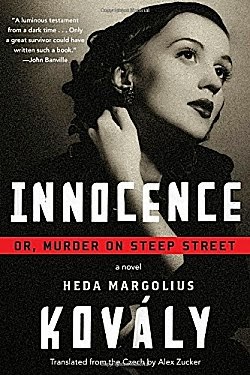 First Line: I got off the tram at Můstek and walked the rest of the way.

Almost lost to censorship, Innocence features some of famed Holocaust memoirist Heda Margolius Kovály's own experiences in an engrossing mystery set in 1950s Prague, a city and a country firmly under the thumb of the Soviet regime.

Life in Prague is hard. Not just because of shortages or political corruption or the unceasing surveillance, but because there is no way of knowing whether or not your neighbors-- or even your family and friends-- are spying for the government. Even if they're not spying, what are they going to say if they're picked up for questioning by a State Security agent?

Secrets are a way of life, and when a little boy is murdered at the movie theatre where his aunt works, the investigation begins to shine too much light on the personal lives of the theatre's four female ushers-- and they all have secrets to hide.

When you begin reading Innocence-- and I hope all of you will-- please do not skip the introduction written by Heda Margolius Kovály's son. These pages will show you that Kovály's own life was every bit as interesting as her book, and as each character's secrets are revealed, there is such an incredible ring of truth that it cannot be denied. Kovály was influenced by Raymond Chandler, but this little jewel of a mystery is far from being some slavish copy.

The theme of innocence runs throughout the book, and what Kovály's own experiences taught her was that, in a regime like that, no one is really innocent. It's a horrifying thing to contemplate, but by book's end, readers will come to realize that it's true.

Vendyš wiped away the rain sliding down his nose. Steep Street was like an empty auditorium after a performance, with Vendyš the late-coming spectator who could only guess at what had taken place.


Kovály has a talent for writing one- to two-line descriptions of her characters that are tiny slices of perfection. So many of today's writers would take paragraphs or even pages to define each one of theirs. There are other passages in Innocence that are beautifully descriptive and psychologically insightful. By the time the mystery is solved and Kovály's story has come to an end, I felt emotionally brutalized-- and in awe. She distilled years of fear and horror and rage into this book, and as a result Innocence is haunting... and extraordinary.