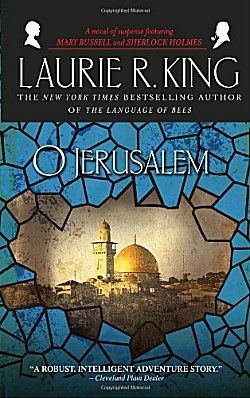 First Line: During the final week of December 1918, shortly before my nineteenth birthday, I vanished into British-occupied Palestine in the company of my friend and mentor Sherlock Holmes.

At the close of 1918, Sherlock Holmes and nineteen-year-old Mary Russell find themselves in Palestine, thanks to Holmes' brother, Mycroft. Authorities there have been baffled by a series of unsolved murders that appear to be unrelated to the growing tensions among the Jewish, Moslem, and Christian factions.

When Holmes insists on reconstructing the latest homicide, the information he gleans leads them straight into danger in the city of Jerusalem. It is in Jerusalem that Holmes and Mary will meet the adversary who will stop at nothing to gain the most seductive thing of all: Power.

Since I'm reading these books in order, I remember Mary Russell telling readers that she and Holmes had spent an extended period of time in Palestine, and O Jerusalem fills in the details. This fifth book in the series did a lot more than advance the story of Mary Russell and Sherlock Holmes. For me, it helped to fill a large historical gap from the time of the Romans until 1948-- and it did so with style. In fact I didn't realize that the mystery didn't really begin until about halfway through the book because I was enjoying the trek Mary and Sherlock were undertaking.

King's subtle humor is sublime as she takes this intrepid duo through the desert with Ali and Mahmoud, two guides who aren't all that enthused about their charges (especially Mary). Life as a nomad is thirsty, blister-inducing, filthy work, and the author tells her tale so well that I often felt like taking a shower and burying my head in a bucket of ice water when I had to set the book aside.

Readers are treated to the sights, sounds, and smells of Jerusalem, as well as bazaars and cliff-hugging monasteries as they watch Ali and Mahmoud's slowly changing opinions of their English companions. The mystery is a good one that keeps the little grey cells chugging away even as I cringed while being taken deep into ancient Jerusalem.

O Jerusalem is filled with what I love so much about this series: marvelous characterizations, an intriguing mystery to solve, a wonderful dry wit, and a setting that I can really sink my teeth into. Bring on the next one!