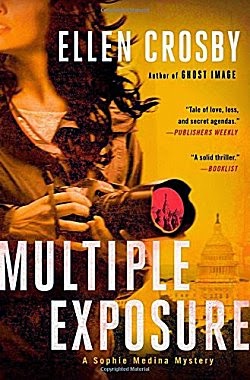 First Line: I've been in too many war zones not to recognize blood when I see it, but I did not expect to find it smeared on the whitewashed walls and puddled on the black-and-white harlequin tile floor when I opened my front door.

Photojournalist Sophie Medina's life becomes a nightmare when she returns to London from an overseas assignment to find that her husband, Nick, a geologist and covert CIA operative, has been abducted and presumed dead. Three months of agony pass in which Sophie decides to move to Washington, DC, to be near family and friends. An intolerable situation gets even worse when a friend in the British government tells her that Nick is a suspect in his boss's murder, that he's been spotted in Moscow, that he's involved in shady oil deals....

Sophie's talent with a camera lands her a needed job photographing an exhibit of Fabergé eggs at the National Gallery of Art. The Russian oligarch who owns the eggs confronts Sophie, implicating her husband in an international energy scheme. With her every move being watched, Sophie has to determine friend from foe as she fights to prove her husband's innocence.

The opening scene in Ellen Crosby's first Sophie Medina novel had me hooked, and I stayed hooked with her excellent story and pacing. When I learned that Nick was a CIA operative, I felt a twinge of unease because I am not a fan of spy thrillers, so I am happy to say that the espionage never went overboard in Multiple Exposure.

Crosby's characters are another reason why i was hooked. Sophie is one smart woman, and she thinks well on her feet-- which is a necessity when you're being shadowed by spies, agents, oligarch's thugs, etc. Except for one slight glitch with a purse, Sophie doesn't do dumb stuff either. Her supporting cast is a strong one as well-- her stepfather Harry and her mother as well as her closest friends, Father Jack and Grace, add depth to an engrossing story. Even Washington, DC is a marvelous character. Throughout Sophie's travels in the city, I learned some fascinating facts about our nation's capital while I was being entertained.

To story, pacing, characters, and setting, add two never-before-seen Fabergé Imperial Easter eggs. I was in a little slice of fiction heaven, and I look forward to reading Sophie's next adventure in Ghost Image.