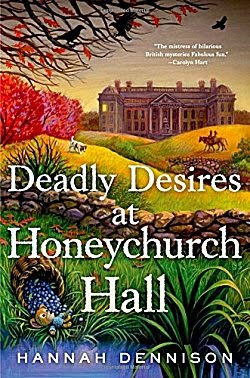 First Line: "I'd rather die than let the wretched government build a high-speed rail network through here."

Kat Stanford has been staying in Devon with her mother in a still-being-renovated cottage on the Honeychurch Hall estate. Now that her mother seems to have settled in, Kat should feel free to return to London and begin her new life as an antiques dealer. An agent even has the perfect premises lined up for her new home and business, but her plans are set aside when the body of a transport minister is found on the grounds of Honeychurch Hall.

The police immediately begin looking at the villagers to fill out their suspect list. The dead man was supposedly involved in plans to put a high-speed train right through the village and the estate, and feelings are running at a fever pitch. With her mother Iris right in the thick of things, the only thing Kat can do is a bit of investigating on her own in order to catch a killer.

I fell in love with the first book in this series, Murder at Honeychurch Hall, and the love affair continues with this, book number two. Author Hannah Dennison must enjoy writing these because a sense of fun shines through on each page. As she stated in a recent tour, every Honeychurch Hall book will feature a real threat to Britain's stately homes, so if you're a reader-- like me-- who enjoys those wonderful, beautiful, old houses, I encourage you to give this series a try.

I also recommend them for the characters Dennison has created. Kat is an extremely likeable, smart, and caring woman who, as a former popular television personality, is still being stalked by the media. She also has a rather batty mother to deal with. Iris has always been a bit of a distant figure in Kat's life, tortured by headaches that would send her to her bedroom for hours at a time. However, Kat has recently learned that Iris was actually in her bedroom writing romance novels all those years, and she's the very popular author Krystalle Storm. Iris is a strange mix of wisdom and innocence. (Too many years hidden away writing bodice rippers?)

In this book Dennison livens up the action with Kat's Uncle Alfred. Between Iris and her brother, Kat may wind up talking to herself... and arguing with her answers. Newcomers Angela Parks and Patty Gully are in the thick of it, too, and they both kept me trying to figure out what they were up to.

The mystery in Deadly Desires at Honeychurch Hall is a good one that kept my mental gears whirring. I did manage to deduce part of the nefarious doings but had to wait until the reveal to find out whodunnit.