The Ghost Fields by Elly Griffiths 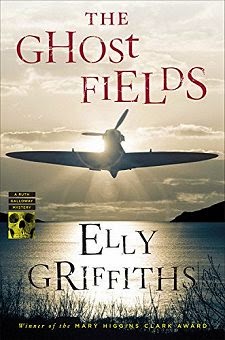 First Line: It is the hottest summer for years.

All construction on a new housing development comes to a screeching halt when a World War II airplane (complete with pilot inside) is unearthed. Dr. Ruth Galloway knows immediately that something is wrong with the discovery, and DNA testing proves her right. The pilot inside the plane is identified as Fred Blackstock, a local member of the gentry who had been reported dead at sea. The current members of the Blackstock clan have interesting reactions to the news.

In a situation where no more complications are needed or even wanted, a television company shows up, wanting to make a film about Norfolk's "ghost fields"-- deserted World War II air fields. There happens to be one in the area that's currently being run as a pig farm by one of the young Blackstocks, and when human bones are found there, Ruth and Detective Chief Inspector Harry Nelson find themselves in a race against a flood to find a killer.

Elly Griffiths' Dr. Ruth Galloway series is one of my must-buys, and it just keeps getting better with each new book. In The Ghost Fields, the weather plays an integral part in the action, first with unrelenting heat and then with endless rain and flooding. Griffiths makes Norfolk come to life, and her choice of title is particularly evocative. This book talks not only of the abandoned air fields of World War II, but other "ghost fields" from centuries past. Ruth is dealing with a Bronze Age burial when the book begins, and there have also been battles fought in the exact same area during the English Civil War.

No, Norfolk is not short of ghost fields, and further questions arise once we're introduced to the Blackstock family. They live in a drafty, ramshackle manor house barely holding its own against the water around it, and the family is just as strange as the ancestral home. A batty grandfather. A pleasant but distant father. A welcoming mother who's filled with unrealistic schemes to turn the house into a moneymaker. A handsome, charming pig farmer of a son who values his privacy. An incredibly beautiful daughter who's determined to make her name as an actress. Each Blackstock is odd in his or her own way, and trying to gather them together is like trying to herd cats. When DCI Harry Nelson throws up his hands and growls that there are too many Blackstocks, you just have to smile ruefully and agree.

But family is an important theme in The Ghost Fields, and it's not just the Blackstocks. Ruth's daughter Kate is five and now in school. Being a good mother is even more important to Ruth than the work she is so passionate about. Nelson has issues with both his family at home and his co-workers. He even realizes that he considers Clough and Judy to be family. Griffiths knows how to keep her readers completely involved with her characters. The mystery and the characters rely on each other.

There's history. There's danger. There's plenty of family feeling, and contrary to a visiting American's belief that "there's never bad weather in England," there's plenty of that as well. By book's end, we may even have sorted out all those Blackstocks.

The only bad thing about finishing The Ghost Fields is knowing that I have to wait for the next book. This series is superb, and this book is the best so far. If you've never met Ruth Galloway, treat yourself. Start at the beginning with The Crossing Places and read each one. You'll be as hooked as I am.