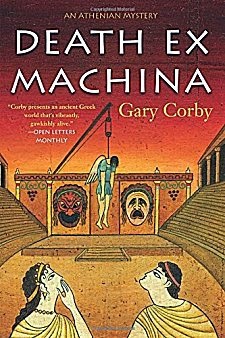 First Line: In my time as an investigator I had received many difficult assignments, problems that were usually dangerous, often deadly, and sometimes downright impossible.

Nicolaos has been called to investigate some strange cases, but he never thought he'd be asked to find a ghost. It's time for the Great Dionysia-- the largest art festival of the ancient world-- and a time when many plays are performed in Athens' grandest theater. Nicolaos and his partner Diotima have the ghost publicly exorcised, even though they suspect that the real culprit is all too human.

When one of the actors is found dead on the stage, the matter becomes critical. Without enough rehearsal time, the plays could be flops instead of hits, and that could be a diplomatic fiasco for Athens. Nicolaos and Diotima have to find the killer fast, and it's not going to be easy: the suspect list is much longer than they'd anticipated.

I can always count on Gary Corby to make me feel right at home in ancient Athens. This time Greek drama played an integral part in the story, and it was fascinating to learn the important role it played in the ancient world.

With the start of the Great Dionysia looming on the horizon, all those concerned come up with an ingenious way to buy time for the investigation. (Would that we could do the same today!) Corby's mystery is an absorbing one because the first thing Nicolaos has to do is find out which Romanos was killed. The further he and Diotima investigate, the more it seems that Romanos the actor was a different person for each group of people with which he came into contact. Was the murderer killing Romanos the actor, or the character he was portraying in the play? Was he killed for personal reasons, or did a complete stranger choose him at random? As the two investigate the dead man's life, the mystery twists and turns with each new piece of information. It certainly kept me guessing.

Corby knows how to create a page-turning mystery, and he certainly knows how to infuse his encyclopedic knowledge of ancient Greece seamlessly into his story, but that's not all he does. Not only the setting comes to life, so do the characters. Nicolaos and Diotima are such an engaging couple that you can't help but want them to succeed. Nicolaos' little brother just so happens to be Socrates. (Yes, that Socrates!) In each book the young Socrates gets into some sort of mischief, and in Death Ex Machina, he's being homeschooled. The reason why will make you smile if not laugh out loud.

Another thing that I love about Corby's Athenian mysteries is the humor I find throughout each book. Nicolaos learns not to call one certain play by its title but to refer to it as "the Corinthian play" because it's unlucky to say its name aloud. (MacBeth, anyone?) And when one character asks the rhetorical question "Who in his right mind would ever vote for an actor?" I just had to smile. This humor, referring as it does to our own world, makes us feel more at home in ancient Athens. We humans haven't changed all that much after all, have we?

If you're new to these books, you should be able to read Death Ex Machina with little to no confusion. It reads well as a standalone, but one thing I do advise is to read the author's notes in the back of the book once you've finished the story. You'll find out how much of the plot is based on fact, and which parts Corby tweaked a bit. You'll also be entertained by more of his humor. I am very glad that I discovered Nicolaos and Diotima, and I look forward to more of their adventures.