One Was a Soldier by Julia Spencer-Fleming 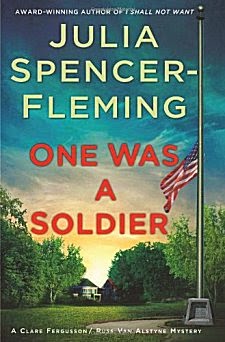 First Line: Sarah Dowling's first thought, peering through the wire-reinforced glass of the community center's door, was that they were an odd group.

It's group therapy time for five veterans in Millers Kill, New York. They're all trying to make sense of their experiences in Iraq and how those experiences have changed them. The Reverend Clare Fergusson is one of the group. She wants to forget what she saw as a combat helicopter pilot and concentrate on her relationship with Chief of Police Russ Van Alstyne. The other four are dealing with traumatic brain injury, an in-country affair, the amputation of limbs, and out-of-control anger. Heavy stuff that's very hard to deal with.

When one of the veterans dies and Van Alstyne rules the death a suicide, Clare talks the other vets into conducting their own investigation that will wind up threatening relationships, jobs... their very futures. That investigation will also uncover deceit with ties far outside their tiny town of Millers Kill.

This seventh book in a wonderful series is quieter and much more personal than the rest have been, but it deals with some very serious subject matter. First and foremost is Post Traumatic Stress Disorder. Each of the five vets attending the group therapy sessions suffers from it, and each one's symptoms are different. Throughout the series, the Reverend Clare Fergusson has been a rock, someone others look up to in times of need. To have her suffer from PTSD and to show her coping with it in very inappropriate ways brings home how serious the disorder is. Readers have already grown to care deeply about Clare, so their sympathy and understanding is more or less guaranteed. By their very proximity, the other four veterans are brought in under the umbrella of understanding that has been extended to Clare.


The lives of the characters also progress in this book, including my favorite, Hadley Knox. Hadley's been thrown into an occupation that she thinks she is very ill-qualified for, but she's determined to do the best that she can for her children, and being a police officer brings in the money that she needs. What she can't see (and we can) is that she's better qualified than she thinks, and I always enjoy the scenes in which she appears.

With all this talk of PTSD and characters' personal lives, you might think that the mystery isn't up to the author's usual high standards. Nothing could be further from the truth. Not only are our favorite characters' lives moving forward, One Was a Soldier also has a first-rate investigation that kept me guessing throughout. One more book, and I'll be current... unless Spencer-Fleming manages to get one step ahead of me!