The Right Side of Wrong by Reavis Z. Wortham 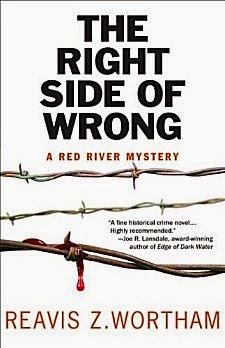 First Line: Constable Cody Parker's phone jangles him from a sound sleep at one in the morning.

Constable Cody Parker has to fight his way through an unusually heavy snowfall to answer a domestic violence call, but he never makes it. Instead, he's ambushed on a lonely country road and almost dead before he's found.

As Cody recovers, his uncle Constable Ned Parker begins piecing together disjointed bits of conversation and adding them to seemingly unrelated murders. As 1965 ends and 1966 works its way toward summer, Ned tries to keep his grandchildren Top and Pepper from getting underfoot. This is serious business. Somehow his peaceful little town of Center Springs, Texas is no longer a safe place to live, and Ned Parker intends to do something about that.

Reavis Wortham's Red River mystery series continues to solidify its position as one of my favorites. I'm torn between wanting to get caught up (I'm within one book of that goal) and wanting to save Vengeance Is Mine as one of my "go to books" in case I have a string of bad reading luck. Decisions, decisions!

In the mean time, I read The Right Side of Wrong much too quickly. I couldn't help myself. It has all the characters I've grown to love: Ned Parker, his wife Miss Becky, his grandson Top, his nephew Cody Parker, Deputy John Washington, and Judge O.C. Rains. An added bonus in this book is a new character, the mysterious Tom Bell, whom I immediately liked. For any of you already acquainted with this marvelous series, you will have noted that I didn't include Pepper in the group of characters I love. That little girl just plain annoys the stuffing out of me, and I wish Top would grow a spine and say no to her hare-brained schemes!

Wortham's Texas in the mid-1960s is pitch perfect as always. Growing up in a rural farm community as I did, he can put me right in the middle of a scene with just one well-chosen word. (The word this time was "bobwire." That's what folks where I grew up always called barbed wire.) Center Springs is a microcosm of our country during the '60s, and The Right Side of Wrong shows us the beginnings of a problem that haunts us to this day and its effects on a small community.

It also shows us how strong prejudice was then and that bigots still had the upper hand; however, we're also shown that the wall is beginning to crumble due to the behavior of people like the Parkers, Judge Rains, and John Washington.

Wortham knows how to write action scenes that will make your hands shake as you try to find a faster way to turn the pages. This time, our heroes travel across the Rio Grande into Mexico in an adventure so dangerous it curled my hair. Wow.

Now this time the Bad-Guy-in-Charge was rather easy for me to deduce, but as in all well-told tales, it's not always the who that makes the story, sometimes it's the how. Watching the judge and the Parkers figure out how to bring him down put a smile on my face.

Reavis Wortham can make you laugh. He can make you cry. He can make you remember your own childhood. He can also make you hunker down so deep inside a story that you don't want to come up for air. You can read these Red River mysteries as standalones and enjoy them, but I don't recommend taking that path. These characters are so wonderful that I strongly urge you to start at the beginning (The Rock Hole) because once you have, you won't want to miss a single chapter in their lives. Do you like Craig Johnson? Peter Bowen? C.J. Box? Donis Casey? William Kent Krueger's Ordinary Grace? If you do, chances are excellent that you'll like Reavis Wortham, too.

Now if I could only make myself stop staring at that lone Red River mystery sitting over there on that shelf....