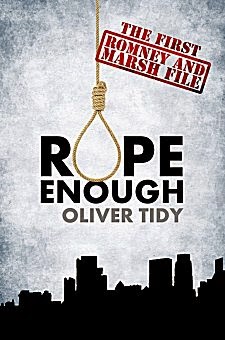 First Line: The metronomic wipers beat away at the winter drizzle.

Detective Inspector Romney has the reputation for being difficult on his patch in Dover, England, but newly promoted Detective Sergeant Joy Marsh isn't going to let that bother her. She is determined to do the best possible job she can.

It's good that she's willing to work hard because on her first day as Romney's sergeant a brutal crime occurs that will test everyone's resolve. It's long hours for all those assigned to this investigation, but only those in control of the budget-- and a few folks waiting at home-- seem to mind.

Rope Enough is a very well-paced, engrossing story that I enjoyed reading. There were just enough twists and turns in the plot to keep me guessing, and I have to admit that one of the things I was wondering about was the title of the book. It reminded me of a certain phrase. Did it mean what I thought it did? Yes, it did, and watching this investigation play out was time well spent.

One of the things I enjoyed most about this book was the excellent job Oliver Tidy did in showing the nuts and bolts of an investigation. In so many police procedurals, we hear of the numbers of policemen assigned to an investigation, but we very seldom ever find out what they're all doing. Tidy lets us know in such a  light-handed way that it doesn't bog down the flow of the narrative.

I also liked the character of Joy Marsh-- what little there was of her. She proves herself to be excellent at picking out stray, disjointed clues and putting them together to get the investigation back on track and moving in the right direction. I can see her going far. What disappointed me was the fact that we got to know very little about what really makes her tick. I want to know more, and I hope this is addressed in future books in the series.

On the other hand, I got to know more about Detective Inspector Romney than I wanted. I didn't find him as difficult as his reputation at first made him appear to be, and I enjoyed watching him be in charge of the investigation. What I thought detracted from the story was the amount of detail given to the new woman in his life and their sex life. It may have spoken to his character, but it really didn't add much to the plot. When I compared what I learned about Romney and the amount of information given about his sergeant, I have to admit that I wondered why the series is called the "Romney and Marsh Files."

While I have pointed out what I think to be weaknesses in the book, it still remains that Oliver Tidy can write a story that keeps me guessing and turning those pages. Characters can be balanced out. Nagging little glitches in grammar and editing can be fixed. But if you can't tell a story that people want to read.... Tidy can tell a story, and he has me wanting to read more.