Night After Night by Phil Rickman 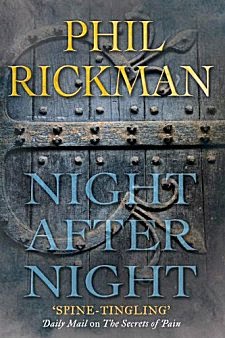 As head of his own production company Liam Defford has his sights set on his next big hit: a reality TV show called "Big Other," about a group of celebrities locked inside an isolated haunted house. Defford hires journalist Grayle Underhill to research Knap Hall, a Tudor farmhouse that was converted into a luxury hotel and then abandoned by its owners at the height of its success.

As Grayle begins her research into the history of the house, she finds that the staff have been paid to keep quiet, but disquieting stories still manage to find their way through the wall of silence. The more Grayle pieces together, the darker the history of Knap Hall becomes-- until she begins to think that it's not safe to lock the participants inside.

As a reader of Phil Rickman's Merrily Watkins series, I've come to admire him for his ability to create a true sense of unease, of chills down the spine, of things just glimpsed out of the corner of the eye. He does this, yet keeps the story grounded in the real world. He does that again in Night After Night.

As Grayle Underhill begins her investigation into the 500-year-old Knap Hall, Rickman was succeeding brilliantly at making me very uneasy about the ancient Tudor farmhouse. In fact, I was reminded of one of my favorite novels, Shirley Jackson's The Haunting of Hill House. I couldn't wait for all those celebrities to be locked inside that house-- and this is as close as I'll ever come to liking reality TV!

Unhappily for me, I found my sense of unease to abate quickly. The story goes into quite some detail about choosing the celebrities and preparing for filming, which I did find interesting, but all that detail took away from the unsavory history of Knap Hall and the feeling that unspeakable things were about to happen.

Instead of things going bump in the night as I'd hoped, the story centered on all the secrets of the celebrity inhabitants. True to Rickman's usual style, the "scary stuff" was all rooted in the real world, but without that carryover of unease and dread to buoy the story, I felt a little bit let down. Night After Night is still an engrossing read, but the wow factor was missing for me.

Suspense, Standalone
Rating: B
Source: Purchased at The Poisoned Pen.