Demise in Denim by Duffy Brown 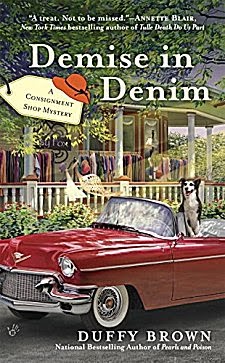 First Line: The convertible top was down, a crescent moon hung low over the marshlands, and the night sky was filled with a bazillion stars as I drove Walker Boone's precious red '57 Chevy toward Tybee Post.

You know it has to be a desperate situation for Walker Boone to let Reagan Summerside drive his beloved classic car-- and it is. Boone is on the run from the law, since the law is convinced Boone killed Conway Adkins.

Reagan knows that Boone is no killer, so she has to set out to prove it before the police find the man whose kisses make her toes curl in her flip-flops. Trouble is, Adkins was probably the most hated man in Savannah, and the list of suspects Reagan must go through is a long one. At least she's got the help of her Aunt KiKi and her friends, and she's going to need it. Someone wants Walker Boone to take the fall for Adkins' death. Everyone knows three things about Reagan: (1) she's nosy, (2) she's incapable of letting the police do their job, and (3) she's sweet on Boone. The killer knows Reagan will have to be taken out of the equation.

I've enjoyed Duffy Brown's Consignment Shop cozy series set in Savannah, Georgia, and Demise in Denim is the best of the bunch. Brown's humor and characterizations absolutely sparkle and remind me of what I used to enjoy so much about Janet Evanovich's Stephanie Plum books (without that never-ending romantic triangle).

Reagan Summerside is a good-hearted, funny, yet rather bumbling amateur sleuth, and when she starts snooping with her Auntie KiKi (a former roadie for Cher), or one of her friends Mercedes (house cleaner and makeup artist for a local funeral home) or Chantilly (former UPS driver, now cook for a catering company), you just know there's going to be trouble-- usually the kind that makes you laugh.

I have friends who love to read yet-- for some unknown reason-- have an aversion to Southern accents, and I can report that Brown is skilled in giving readers the flavor of Southern speech without a y'all in sight. I'm not quite sure how she manages to do that, but it is very well done.

Even though I did recognize the guilty party almost immediately, that didn't matter because I was enjoying the characters so much. By book's end, all the loose ends were neatly tied up, and I closed Demise in Denim with a smile on my face. This is a very enjoyable series that I recommend to all cozy lovers.