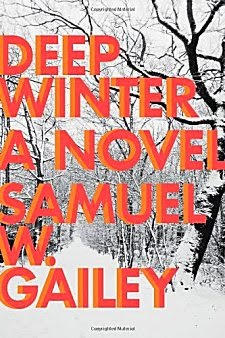 First Line: Danny had seen Mindy naked once before when they were just eight years old.

It's been a harsh winter in the small town of Wyalusing, Pennsylvania. When Danny Bedford is found cradling the body of a brutally murdered local woman in his arms, everyone jumps to the easiest conclusion: Danny's the killer.

Somehow Danny manages to escape into the woods, but the prognosis isn't good. He's being pursued by the deputy sheriff, the murdered woman's brothers, and anyone else who wants to see justice done. As Danny eludes capture, a web of deceit is slowly uncovered, and in a matter of hours, Wyalusing will never be the same.

Deep Winter is a bleak and brutal book that is written in a sparse and beautiful style. I wish I could've enjoyed the story as much as I did the writing style.

There are only four sympathetic characters in the book: Mindy, the murder victim; the older couple in town who run the laundromat; and Danny Bedford, a young man who suffered a childhood brain trauma that left him disabled. He has a job maintaining the laundromat. He has his own place to live. He's never hurt anyone in his life, but he's had to get used to being either ignored or being the butt of cruel jokes because he's "different." Unfortunately these four characters are incidental to the plot.

Instead the story focuses on Deputy Sheriff Mike Sokowski. Deep Winter is the portrait of a drunk only lightly touched with intelligence but filled to overflowing with greed, hatred, and violence. As the pages turned, I wanted to sweep Sokowski under the rug-- pretend he didn't exist. But I couldn't look away. Gailey created a character who truly frightened me.

Backing up Sokowski is Carl, his weak-willed satellite; Lester the sheriff, an old man looking retirement right in the face and willing to skate along the path of least resistance; and a community of people who look the other way if a situation doesn't directly concern them. The more I read, the more I despised these people. How can you ignore an impending train wreck? Isn't it easier to deal with something right now instead of waiting until there's a body count?

And then I realized that I didn't like myself much either. What did I say a couple of paragraphs ago? I said that I wanted to sweep Sokowski under the rug... pretend that he didn't exist. Just like all those townspeople had been doing for years. Time for me to climb down off my high horse.

Yes, Deep Winter is a powerfully written book, and it made me think. It also deeply depressed me. It's definitely the sort of book you need to be in the right mood to read.