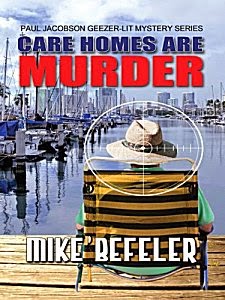 First Line: We made it safely to Honolulu, without the plane crashing and me drowning in the ocean or my old body being consumed by sharks.

Eighty-something Paul Jacobson is on vacation in Hawaii with his wife, son, daughter-in-law, and granddaughter. Everyone's all set to have fun, but if anyone can blunder into trouble, it's Paul. First he finds a dead body floating in the Ala Wai Marina. Then someone is killed at the care home when he's there visiting friends. This old geezer with short-term memory loss is going to need all his resources to get himself out of trouble.

I've enjoyed Mike Befeler's "Geezer Lit" series since the first book, Retirement Homes Are Murder-- probably because the main character reminds me of my own grandfather in so many ways. Paul Jacobson has a bit of a short fuse and tends to shoot off his mouth when he should keep it closed. He also has short-term memory loss. Every morning when he wakes up, he's completely forgotten everything that's happened in the recent past. That last thing alone would turn most people into curmudgeons, but not Paul. In spite of everything, he's been incredibly blessed with a son and daughter-in-law who love him and include him in as much of their lives as possible. His granddaughter thinks he's the bee's knees and loves spending time with him. He's found love for the second time, and his wife doesn't mind waking up every morning to be asked who she is. He's even found a way to cope with his memory loss: before bed, he writes down all the events of the day so that he can read it all when he gets up in the morning. Yes, Paul Jacobson is a wonderful main character, and Befeler backs him up with a strong supporting cast.

For my money, Care Homes Are Murder is the strongest book in the series so far. The Jacobsons see and do as many things as possible, and as a result, the setting of Hawaii comes to life. The mystery itself is truly intriguing, with just enough plot threads to keep me guessing. In fact there were several times that the author set me up to believe that something specific was going to happen. Each and every time I got that idea in my head, nothing happened. Befeler really kept me on my toes.

This is a series that could easily get repetitive-- Paul having to write down the day's events each evening, none of the police believing that short-term memory loss malarkey, and so on. Befeler avoids the repetition, and I particularly appreciated the fact that Paul didn't have the same old run-around with the police.

The humor in this book is what helps put it a big step above the rest in the series. Paul and his granddaughter are a formidable-- and funny-- team of sleuths, and Paul's son's fixation on renting white SUVs is a laugh-out-loud running joke throughout the book. And then... there's the inclusion of a new character referred to as "Hurricane Madeline." Madeline is a force of nature who could easily be turned into a caricature, but Befeler gives the woman depth. And funny! I was almost rolling in the floor with laughter several times. Madeline comes within an eyelash of stealing the book away from Paul, and I hope this isn't the last time I see her.

A mystery that kept me guessing, a tropical paradise for a setting, wonderful characters, laugh-out-loud humor, and the chance to see a vital group of people of all ages who love each other and love spending time with each other. Speaking of love... I love this series, and I can't wait to see what kind of trouble Paul Jacobson gets into next!