An Unwilling Accomplice by Charles Todd 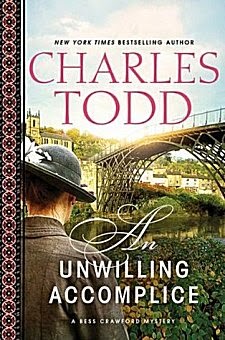 First Line: I'd just brought a convoy of wounded back to England, and as I walked into Mrs, Hennessey's house in the cool of early morning, I thought what a haven of tranquillity it was.

It's the autumn of 1918, and Nurse Bess Crawford has returned to London with some wounded soldiers who needed her care. She's barely had time to go to her flat when she's told that her assistance is required on another matter. A wounded soldier confined to a wheelchair will be going to Buckingham Palace to be decorated by the King, and the soldier has asked for Bess's help.

Although Bess doesn't remember the soldier, she thinks nothing of it and accepts the assignment, in great part because it will extend her leave by a day or two. The award ceremony goes without a hitch, but when Bess goes to the man's hotel room the next morning to see that he's ready to go back to the convalescent hospital, she finds that he's vanished. Both the Army and the nursing service hold Bess responsible for the missing soldier, and to make matters worse, the man is spotted in Shropshire where he's been accused of killing a man. Knowing that a patient in her charge has committed murder becomes even more important to Bess than her reputation, and she won't rest until she solves this puzzle. Even if it means her life.

I've long been a fan of Charles Todd's Bess Crawford series, and this book has a truly intriguing mystery. First of all, how did a man confined to a wheelchair manage to vanish without a trace? Secondly, how could he have committed murder? And why? This plot really had my deductive juices flowing.

Unfortunately An Unwilling Accomplice is probably the weakest book in the series, and it has everything to do with its too-large cast and its very uneven pacing. The story is good for showing readers just how determined (or stubborn) Bess Crawford is and how seriously she takes her profession. She becomes obsessed with finding out what happened and risks getting into even more trouble with the Army and the nursing service.

But the pacing of this book is almost its undoing. For much of the time the story drags out interminably, adding many secondary characters who are easy to confuse. Just when I would wonder if anything significant were ever going to happen-- BAM!-- the pace would click into breakneck speed for a bit before slowing back down to a crawl. It's a shame because-- as I've already said-- the mystery is a good one.

I'm still far from tiring of Bess Crawford, and it's the autumn of 1918. What is she going to do once World War I is at an end? I look forward to what Charles Todd may have in store for us.