Too Bad to Die by Francine Mathews 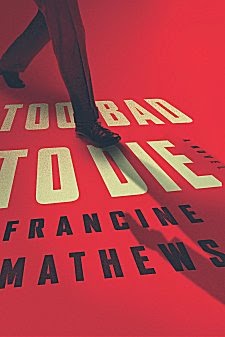 First Line: He learned about Mokie the day the new boy arrived.

Having barely survived his schooling and a quixotic mother, Ian Fleming is now an intelligence officer in the Royal Navy who spends his spare time spinning stories in his head, but when he becomes a part of the all-important Tehran Conference, he has no time to be bored. Tipped off that Hitler's top assassin is in Tehran with orders to kill Franklin Delano Roosevelt, Winston Churchill, and Joseph Stalin, Fleming goes undercover to identify and stop the killer. Between martinis, beautiful women and brutal attacks, this naval officer learns that betrayal can come from very unexpected quarters.

Having read and enjoyed Mathews' previous historical thriller Jack 1939, I looked forward to reading Too Bad to Die, and I was not disappointed. I was hooked in the prologue when I learned the origin of the book title. Too Bad to Die is an excellent blend of history, literature and cinema as it gives us the background of Ian Fleming, the creator of James Bond, and the importance of the meeting between Roosevelt, Churchill and Stalin.

Mathews' research blends seamlessly into her narrative. Her portraits of the world leaders are at once informative and familiar. By sharing scenes from Fleming's boyhood, we can also read and smile and trace the beginnings of one of literature's most famous characters.

While the book satisfies on both history and mystery levels, it also delivers with a good solid pace and exciting action sequences-- although a scene of torture towards the end of the book may make some readers uncomfortable. My radar must be in fine shape because I did find the identity of the super spy/killer a bit too easy to guess, but there's a lot more to this book than whodunnit.

If you're a fan of well-researched, high octane historical thrillers, Too Bad to Die is too good to miss.