The Zig-Zag Girl by Elly Griffiths 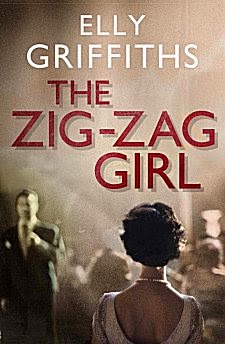 Brighton, England, 1950. Max Mephisto is an old war buddy of Detective Inspector Edgar Stephens, and Stephens has asked him to consult on a murder case. The body of a girl has been found cut into three pieces, and the inspector believes the killer is imitating the famous magic trick that Max invented: the Zig-Zag Girl.

Max is traveling on the show circuit and not really interested in helping his friend investigate, but this all changes when the body of the dead girl turns out to be one of the best assistants Max has ever had. When another murder victim is found, the two men are sure that the answer lies in their army days when they were "the Magic Men," a special ops group that used stage tricks to confuse the enemy. When Edgar receives warning that another "trick" is on the way, he knows that they have to work fast; they're dead center in the killer's sights.

I am a long-time Elly Griffiths fan. I love her Dr. Ruth Galloway mysteries. When I saw a copy of The Zig-Zag Girl at my favorite bookstore, I didn't even look at the synopsis; I bought it and brought it home. I didn't think it looked like the usual cover (or title) of a Galloway mystery, so I wasn't shocked to learn that it's the first book in Griffiths' new Magic Men historical mystery series. A word of warning: this is the UK edition of the book. The Zig-Zag Girl (minus the hyphen) won't be available in the US until mid-September 2015.

I rapidly fell under the book's spell. Griffiths brings to life the atmosphere of the post-war variety theatre (better known as vaudeville in the US) in all its slightly seedy, slightly down-at-heel, on-its-way-out glory. Television will soon supplant these magicians with their beautiful assistants in skimpy spangles, these ventriloquists, and comedians. In the near future all these performers are going to have to find another way to make a living.

As in her other series, Griffiths has created a superb cast of characters. Edgar the innocent, Max the knowing, and "Diablo" the wily old soak were the Magic Men during the war, using their wits and knowledge of stage tricks and illusions to build things on Scotland's northern coast that would keep the Germans from accurately projecting the area's fortifications and firepower. They haven't always gotten along, and each man has his own particular set of strengths and weaknesses. They just have to get used to working as a team again, and it's a pleasure to watch them do so.

Speaking of strengths, one of Griffiths' is portraying that wonderfully annoying sense of overdone gentility-- especially with Edgar's mother. Magicians like Max and Diablo are looked at with suspicion. They aren't really socially acceptable, which makes their work more difficult in some quarters and easier in others. That's why Detective Inspector Edgar Stephens is so important. He's "official" and more welcome with the lace curtain set!

There was only one tiny disappointment (and I mean tiny) in reading this book. It involves the death of a certain character, and I won't go any further into the matter other than to say that it made the lightbulb go off over my head, and snap! I knew the identity of the killer. Fortunately The Zig-Zag Girl is much more than a whodunnit. It is a rich, character-driven portrait of an age and of a  dying way of life-- with murder and deduction front and center. I can't wait for the next installment.