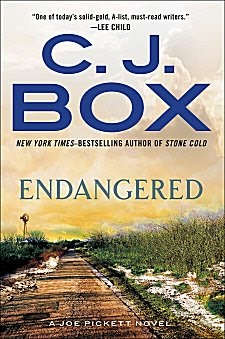 The government is talking about putting the sage grouse on the endangered species list, so it's the worst sort of news when Joe Pickett finds an entire lek (family group) that's been wiped out. But while he's in the midst of cataloging the carnage, he gets a call that no parent ever wants to receive.

The body of a severely beaten young woman has been found dumped in a ditch on the side of the highway, and the sheriff is pretty sure it's Joe's daughter April. April is barely clinging to life, and her father is positive he knows the identity of the person who beat her: rodeo champion Dallas Cates, the young man April ran away with. Even though Cates denies responsibility and there is a lead pointing to someone else, Joe doesn't believe him or the evidence. He's going to find out the truth no matter what-- but the Cates family just might prove to be more than this game warden and enraged father can handle.

I have to admit that I read Endangered as a sort of experiment. You see, I haven't read past book five in C.J. Box's Joe Pickett series, and book five was a long time ago. Even though I enjoyed those five books, I had to ask myself if I was ever going to get the chance to catch up. Since I didn't believe I could, short of shoving everything else to the side and reading the series straight through, I decided to jump in here at book fifteen. A lot of things have happened to Joe and his family in those ten books I didn't read, but Box gave me enough information to fill in the blanks so I didn't feel hopelessly lost. In fact, I almost felt as if I'd never left-- and that's got a lot to do with the author's creation of such a strong character.

There are three storylines on the move in Endangered. There's what happened to all those sage grouse for starters. Most people probably don't think of the ramifications of placing animals on the endangered species list, but Box makes it quite clear what could happen if those birds are, and he weaves the information into the narrative seamlessly. This storyline also adds a lot of tension and stress to Joe's life at a time when he certainly doesn't need it. The "sage grouse twins" Annie Hatch of the Bureau of Land Management and Revis Wentworth of the U.S. Fish and Wildlife Service seem to go out of their way to push Joe over the edge.

The second storyline involves Nate Romanowski, who just might be released from federal custody as long as he agrees to jump through all the hoops that FBI agent Dudley has set up for him. Dudley ranks right up there with the sage grouse twins in being adept at making people lose their tempers. This storyline is a quiet one, but longtime readers know Nate will make his presence known.

The third storyline is the most important: the identity of the person responsible for what happened to April Pickett. It has Joe treading the fine line between being a father and being a law enforcement officer. Box has created one of the best dysfunctional families in fiction with the Cates. From the quotes by Ralph Waldo Emerson and Eminem at the very beginning of the book to warnings given to Joe by the sheriff, readers know from the start that Brenda Cates is the Ma Barker of Wyoming. She is the one person in that violent family that Joe has to be most careful of. Knowing that, does it mean that there are no surprises in this storyline? Don't believe that for a second!

I'm so glad I decided to head back to Wyoming to visit a spell with Joe Pickett. I'd forgotten how much I enjoyed Box's intricately woven plots, fast pacing, and well-drawn characters. As the chapters flew by, I became convinced of one thing: no way am I going to let another ten books go by before I read another one. Joe Pickett's simply too good to neglect. Shame on me!