The Strangler Vine by M.J. Carter 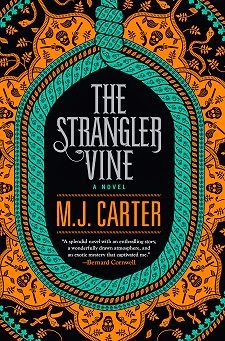 First Line: He stumbles out from the mango grove and at that moment the thick monsoon clouds, which color the night a dull charcoal grey, shift.

India, 1837: New to the British East India Company, young William Avery feels as though his life is wasting away in Calcutta while he waits to be posted somewhere where he can have adventures and be covered in glory. Now all he can do is run up debts and try to court the fascinating Helen Larkbridge.

All that changes when he's given a temporary promotion and teamed with newly named Special Inquiry Agent Jeremiah Blake to find a famous writer who's disappeared. Avery's partner is a genius at languages and disguises, but he's gone native. Blake has made his discontent with British colonial rule known, so Avery is ordered to keep an eye on him.

The further in country they travel, the more danger they encounter, and everything seems to tie into the mysterious and deadly Thuggee cult. It may be profound culture shock for young Avery, but he's got to learn fast. If he doesn't, he won't be returning to Calcutta to make his report.

Author M.J. Carter brings colonial India to life in that period twenty years before the Great Mutiny of 1857. Life in Calcutta is exotic and expensive. Even a young soldier like Avery is expected to have a minimum of seven servants! To the British, every native of India is inferior-- and so are their language, their culture, their food, their architecture-- nothing escapes contempt. The East India Company is there to keep the peace so they can reap the ultimate in profits. That's the bottom line. The less contact with the natives the better.

At the same time, a fascinating and layered portrait of the Indian people is shown, from the lowest of the servant classes all the way to princes who hand out bags of rubies, sapphires, and diamonds as though they were an endless supply of chocolates. Whenever the political and financial aims of the East India Company differ from what is actually needed and expected in the country, explosive situations arise. The Strangler Vine delves into the devious means the East India Company used to bend everyone to their will.

All this is seen through the eyes of young William Avery, who at first is easily swayed by the company he keeps. Bored and impressionable, he does everything he's expected to do (including running up debts) and even begins to cultivate his own superior air when dealing with the natives. His assignment with Jeremiah Blake is the best possible thing that could have happened to him. Traveling with this taciturn man, Avery gets out into the country away from the stifling influence of the Company to see how the people really live. Blake and his second-in-command, Mir Aziz, are giving Avery an education, and I liked watching the young man change through various encounters both tame and deadly. There's just a touch of Holmes and Watson about Blake and Avery, and it's going to be interesting to see how this relationship grows in future books.

The only two things that detracted from the book for me were its pacing, which kept bogging down, and Avery's romance with Helen Larkbridge, which felt tacked on and unnecessary to the plot. However, The Strangler Vine's setting and its two main characters definitely make me anticipate more books in this new historical series.